Tony is at it again - he's hitting the gutter, running.


Mocking someone for their appearance and not their science. The acolytes follow with embellishments as usual: 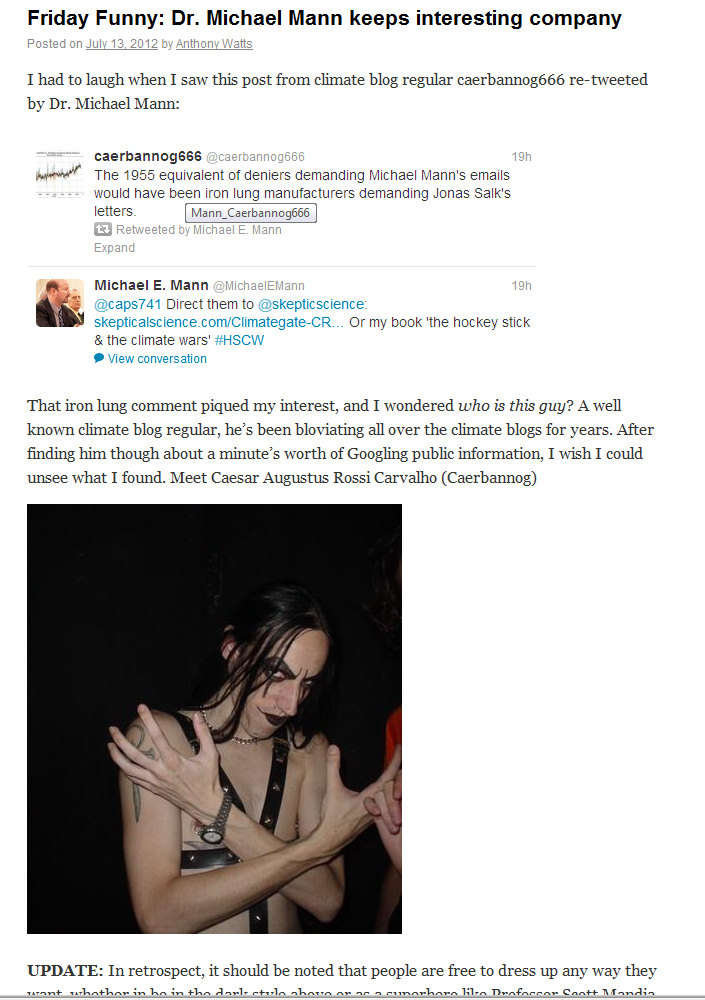 
jayhd says:
July 13, 2012 at 9:29 am
Even though as a rule I don’t make fun of the mentally ill, I’m one of the skeptics/deniers who believe the CAGW promoters and their followers should be ridiculed every chance we get


Duke of Deniers Dr. Lumpus Spookytooth, phd. says:
July 13, 2012 at 11:03 am
Umm, this photo says about a million words. Clearly, Caerbannog is a far left wing nut, and these are the types of people supporting magical CAGW. In fact, Heartland ought to put up a billboard of this clown with a caption saying “he believes in global warming, do you?’

I would suggest peoples private lives are irrelevant in this war if it they are harmless.

But perhaps worse is dear old tony may have got the wrong man - I hope he hasn't revealed any email address or this person may be getting death threats like those sent to Phil Jones (see previous entry).

From Caerbannogs comments he seems to have an excellent English ability, and from his youtube profile is from USA and is 57 years old!


@sciam Back in the 70's, my quantum mech prof at UCLA told the class about that -- the punch line to his story? "Well, we burned it up".
His "following" list on twitter shows nearly all climate or green stuff - no goth, no heavy metal... it just doesn't stack up in my books.
I rather hope the seemingly Italian tony has unearthed does not take the death threats (he'll probably get) as unconcernedly as climate scientists.
Of course Tony has probably not realised that there are many  Caerbannogs! 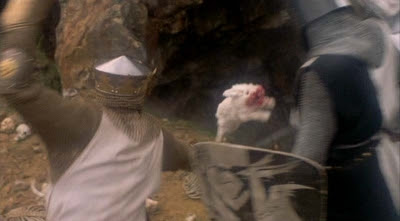 TIM: Yes, I can help you with your guest.
ALL OTHER KNIGHTS: Thank you. Yes, thank you very much.
TIM: To the north there lies a cave, the cave of Caerbannog, wherein, carved in mystic runes, upon the very living rock, the last words of Olfin Bedwere of Rheged ...
TIM: ... make plain the last resting place of the most Holy Grail.
ARTHUR: How shall we find this cave, O Tim?
TIM: Follow!
TIM: But follow only if you are men of valour. For the entrance to this cave is guarded by a monster, a creature so foul and cruel that no man yet has fought with it and lived. Bones of full fifty men lie strewn about its lair ... therefore sweet knights if you may doubt your strength or courage come no further, for death awaits you all with nasty pointy teeth.
TIM: There he is!
[They all turn and see a large white RABBIT lollop a few yards out of the cave. Accompanied by terrifying chord and jarring metallic monster noise.]
ARTHUR: Where?
TIM: There.
ARTHUR: Behind the rabbit?
TIM: It is the rabbit.
ARTHUR: ... You silly sod.
TIM: What?
ARTHUR: You got us all worked up.
BEDEVERE: You cretin!
TIM: That is not an ordinary rabbit ... 'tis the most foul cruel and bad-tempered thing you ever set eyes on.
ROBIN: You tit. I soiled my armour I was so scared!
TIM: That rabbit's got a vicious streak. It's a killer!
...
ARTHUR: Go on, Bors, chop its head off.
BORS: Right. Silly little bleeder. One rabbit stew coming up.
TIM: Look!
[As TIM points they all spin round to see the RABBIT leap at BORS' throat with an appalling scream. From a distance of about twenty feet there is a tin opening noise, a cry from BORS. A quick CLOSE-UP of a savage RABBIT biting through tin and BORS' head flies off. The RABBIT leaps back to the mouth of the cave and sits there looking in the KNIGHTS' direction and growling menacingly.]
ARTHUR: Je...sus Christ!
TIM: I warned you!
Update14/7/12 21:25
Tony loses it! Picks up his ball and goes home!

REPLY: I’ve asked for corrections in the past, such as the time I asked for a factual correction to an article and got accused of having sex with farm animals for my trouble. See here and scroll down to the bottom and note the “corrections” in red. They refuse to take that down too. So, I’ve given up trying for the activists that you consort with and defend, they simply don’t care. Caerbannog666 hasn’t asked for a correction, not has he denied he’s the person in the photos. He’s aware, but has done nothing. I’m not the least bit interested in what a few anonymous cowards think I should do/not do. ‘Caerbannog666′ has to make the request and he’s the only one whose opinion matters. He can use the contact form, or he can leave a comment on tips and notes. So far he’s done nothing. And since I’m tiring of the usual anonymous people who think that their opinion matters more on this issue, I’m closing comments. As stated, if ‘Caerbannog666′ wants a correction, he can ask for one and show why, and if he can demonstrate why he’s not the same person, I’ll gladly make a correction.

He now has complete responsibility for hate mail sent to the Brazilian. I'm sure the Caerbannog (climate) is totally unconcered by Tony's error.