Confirmation of the Green House Effect

The Effect of CO2 on IR 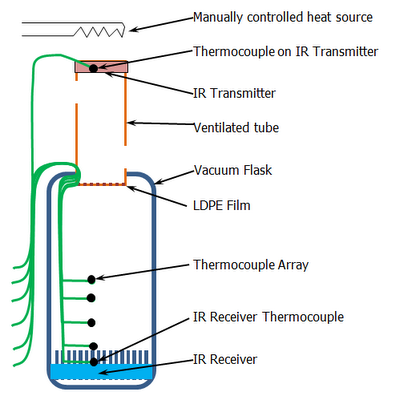 Method
1       Temperature recorded at 1 second intervals using an eight channel USB thermocouple interface
2       Apparatus set up as shown but with the IR transmitter isolated from the system. The Internal volume of the vacuum flask was filled with room temperature air (RH approx 50%). The flask then had 60ml of CO2 injected (3 lots of 20ml) (This increases the concentration of CO2 but not to the full 60ml as each injection would displace some of the already injected CO2).
3       IR Transmitter maintained at greater than 100C whilst thermocouple temperatures stabilised
4       When stability reached IR transmitter cooled to 101C and placed on top of tube
5       Temperature of IR transmitter maintained as stable as possible at approximately 100°C during the heating of the gas to greater than 25°C
6       The IR source was removed and the vacuum flask air replaced with room air (using a small fan).
7       The system was then cooled by placing ice cubes in a glass on the LDPE film on the vacuum flask.
8       The system was then reassembled but without the IR source.
9       The air temperature was the allowed to stabilise.
9       The test method was repeated until the air temperature was above 25°C
10     The Air in the flask was then enhanced with CO2 and cooled again, repeating the same method as above

11     The same method was also run (with CO2 and normal done in reverse order) on a previous occasion.
The Results:
1       Using the last 2 runs (room air then CO2 enhanced room air) and measuring the slope of temperature rise per second at around 25°C shows a significant increase with more CO2
2       Also the temperature array record a smaller spread with increased CO2. 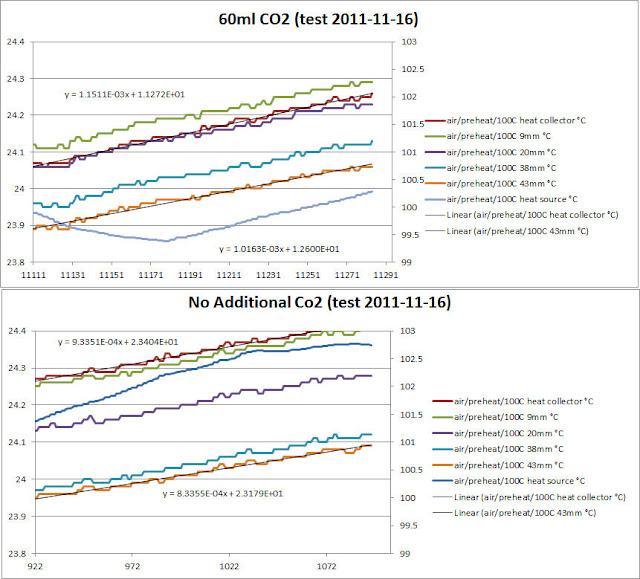 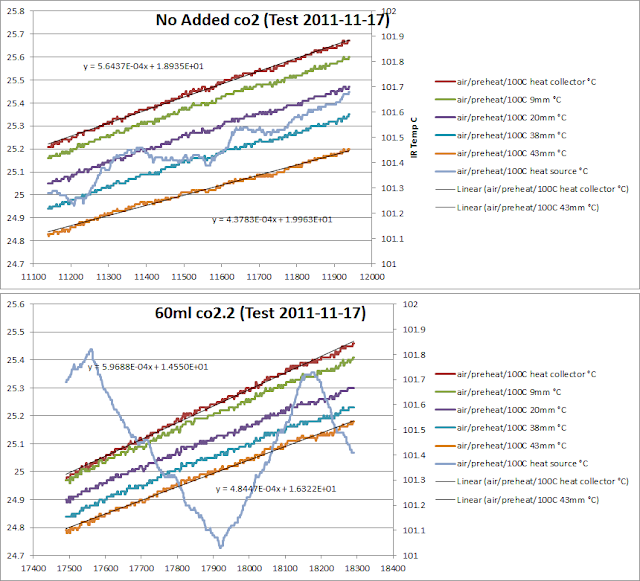 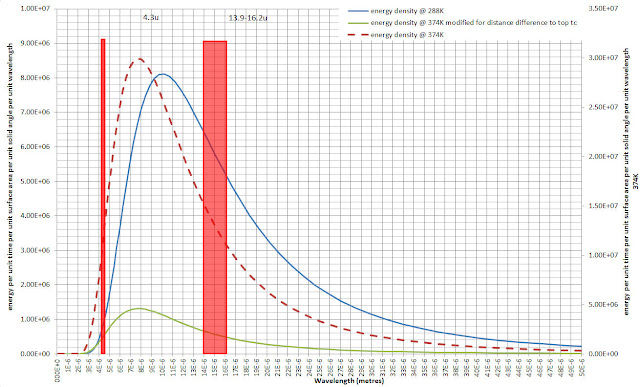 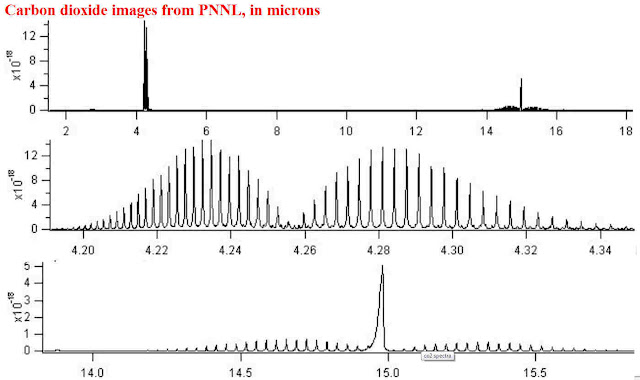 CO2 3 times more absorption at 4um than 15um
BB radiation curve shows that 4um absorption and 16um absorption are similar when sensitivity is considered
101C curve always adds less energy to CO2 than 25C re-radiator at 45mm Sensor. The difference will increase as the sensor distance from the re-radiator decreseas

Many changes have been made to satellite derive temperatures ( I have asked Spencer to explain the differences and unrecorded adjustments on many blogs. BUT never has he bothered to explain).
With the current BEST surface temperature  slanging matches raging on the anti AGW blogs all eyes seem to be turning to the satellite record and opinions seem to suggest that these results are what everyone should be usingas the gold standard (mainly because they only show the last 8 year and these have a cooling trend!!)

What goes up must (in earth orbit) eventually come down.
NOAA-15 was once the satellite producing the temperature records (from 1998) however as the hardware progressively fails the data from the AQUA satellite has been used (data available from 2002)

This gave a 6 year overlap where the temperatures could be compared and corrected. This, according to Leif Svalgaard is what happens with the TSI measurements for solar activity.

People are quibbling about discrepancies of 0.12 K/decade  but looking at the comparison between NOAA-15 data and AQUA this 0.12K/decade is the discrepancies produced by the two satellites and modified by the same team. 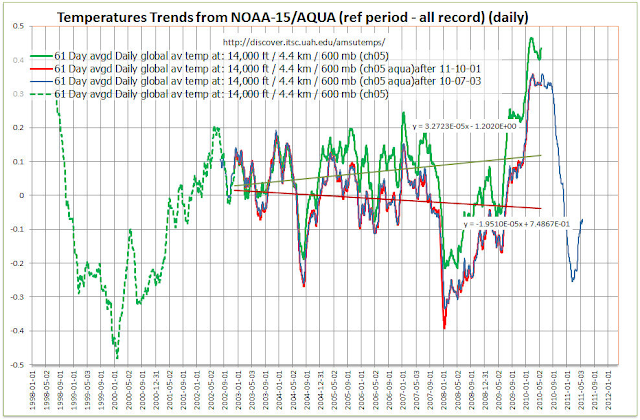 From the above plot during the overlap period:
NOAA warming is 3.27e-5K/day = 0.119K/decade
AQUA warming is -1.95e-5K/day = -0.0712K/decade
Also of interest is the two plots for the same series but obtained at different times red and blue in the plot these seem to have been revised without explanation (by up to .08K)

Looking at CH 4 data, the current data on their web site runs from 2002 to 2008 (with the last 6 monts failing) The data that was available (NOAA?) went from 1998 to 2011 and despite this being the longer record  is not used on their Discover website. 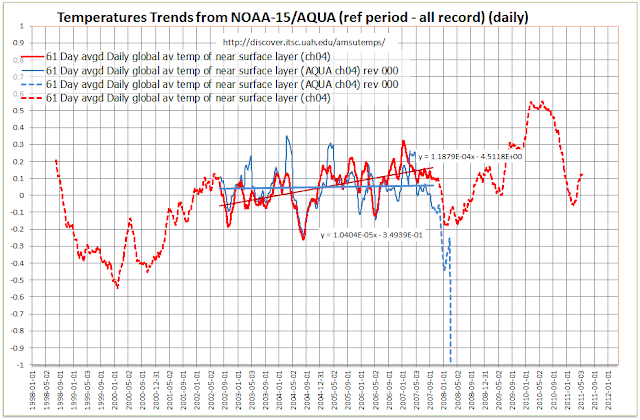 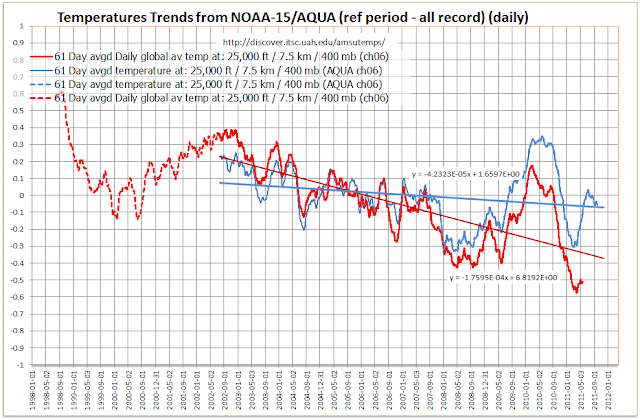 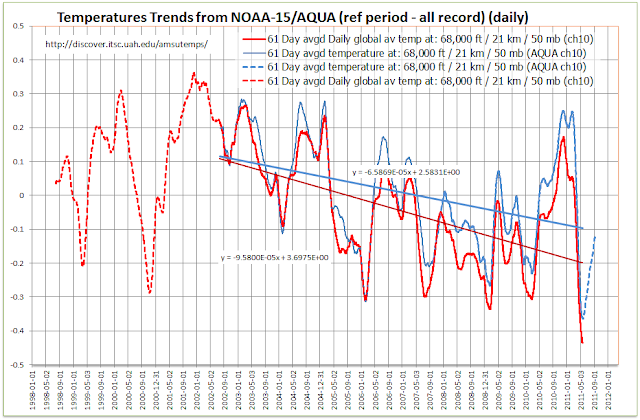 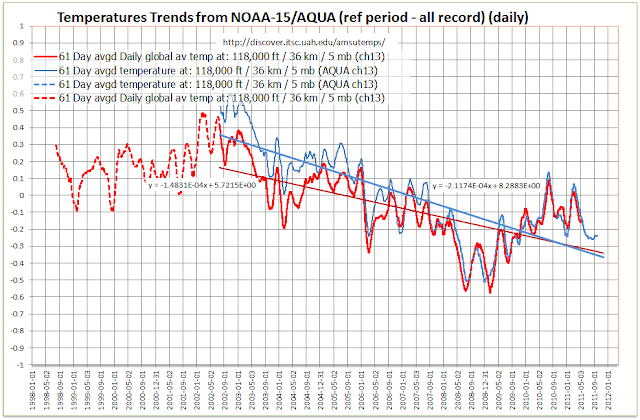 Another plot shows that CHLT (NOAA defunct) and CH04 (recently AQUA defunct) had peaks and troughs occurring at the same time. However comparing CH04 to Sea Surface temperature the temperature of the sea changes BEFORE the air temperature by a couple of months. HOW? 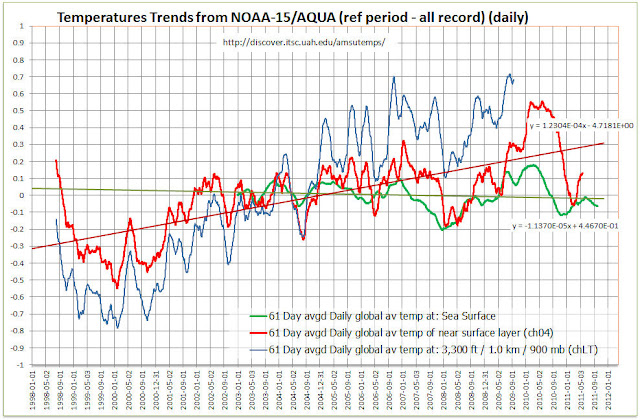 Conclusion
There seems to be many more problems with satellite temperatures than with surface temperatures. Why then are these held up as being the golden standard???


Schnare seemingly lies about his employment
Schnare and Horner show signs of illegally releasing Mann Emails despite agreeing not to share!
Posted by thefordprefect at Wednesday, November 02, 2011 0 comments