The US Laws are aimed at web sites outside the US apparently (sites in the US are well controlled)!
In my view you should abide by the laws of your place of residence - Just because Saudi has laws against drinking must no mean that it is illegal to drink in the UK. It must also not mean that the Saudi authoritories cannot demand that all alcoholics in the UK must be extradited to Saudi for trial.

So why is it possible for the US to demand the UK extradites a student who has broken no UK law - it is not illegal in the UK to show links to sites hosting movies and TV programmes (illegal). This is just what search engines do after all!

This is what has happened to Richard O’Dwyer -  the UK has extradition agreements with the US and the media moguls have demanded extradition to the US  for trial against THEIR laws
See UK citizen Richard O’Dwyer’s case:
http://www.independent.co.uk/news/uk/crime/student-to-face-us-trial-over-tvshack-website-6289235.html
Other court cases have proven his web site was legal in the UK.

Does one search the world for the most sensitive nations and force everyone to adopt their laws?

If you are in the UK write to your MP about Richard O’Dwyer's case – extradition makes no sense for someone who has broken no current UK laws!

Let this one go and who knows what flood gates get opened.
Posted by thefordprefect at Thursday, January 19, 2012 0 comments


BTW, I think this here debate is the best form of “peer review”

No…It is evidence of how, outside of the scientific community, people can endlessly debate things that inside the scientific community would quickly and rightly be dismissed as nonsense.
The fact that this is still being debated despite the best attempts by some of us to inject correct science into the debate shows how many people seem unable to distinguish actual science from nonsense. This is particularly true when the nonsense aligns more with what they want to believe than the science does. – Anthony
REPLY: And this Joel, is where you fail miserably. The point of this is education. To learn people must make mistakes. The problem with the “scientific community” is that they poo poo and denigrate people like myself and those who frequent this blog for going through the learning process discussing things they consider off limits. The fact is though, that anyone who maintains a closed mind to re-evaluating anything is a lost soul, capable only of self affirmatiom and confirmation bias.
I could have prevented this post, knowing full well at the outset that it had serious problems, but then, nobody would have learned anything. Unlike you and the team, I prefer to allow such open debate, even if the debate shows just how wrong the idea can be. The real value is in the journey. I refer everyone to the conclusion of this discussion in Willis Eschenbach’s thread A Matter of Some Gravity
You’ve spent hours dominating this thread and the original, and many have learned something from it, some have not. But in honor of your pig-headedness displayed here, I’m closing the thread. The conversation can continue on the Willis essay linked above. Take a 24 hour time out before you try to take command of that thread too. – Anthony

Has anyone changed their view because of this educational exercise?

Some of the rest is interesyting in this post:

There are two types of lapse rate:
Environmental lapse rate – which refers to the actual change of temperature with altitude for the stationary atmosphere (i.e. the temperature gradient)
The adiabatic lapse rates – which refer to the change in temperature of a parcel of air as it moves upwards (or downwards) without exchanging heat with its surroundings. The temperature change that occurs within the air parcel reflects the adjusting balance between potential energy and kinetic energy of the molecules of gas that comprise the moving air mass. There are two adiabatic rates:[6] Dry adiabatic lapse rate
Moist (or saturated) adiabatic lapse rate
http://www4.uwsp.edu/geO/faculty/ritter/geog101/textbook/atmospheric_moisture/lapse_rates_1.html
In "The Atmosphere" we discovered that air temperature usually decreases with an increase in elevation through the troposphere. The decrease in temperature with elevation is called the environmental lapse rate of temperature or normal lapse rate of temperature. Recall that  the normal lapse rate of temperature is the average lapse rate of temperature of .65o C / 100 meters. The environmental lapse rate of temperature is the actual vertical change in temperature on any given day and can be greater or less than .65o C / 100 meters.  Also recall that the decrease in temperature with height is caused by increasing distance from the source of energy that heats the air, the Earth's surface. Air is warmer near the surface because it's closer to its source of heat. The further away from the surface, the cooler the air will be. It's like standing next to a fire, the closer you are the warmer you'll feel. Temperature change caused by an exchange of heat between two bodies is called diabatic temperature change. There is another very important way to change the temperature of air called adiabatic temperature change.
http://daphne.palomar.edu/jthorngren/adiabatic_processes.htm
Make sure you notice that we are talking about moving air (rising or subsiding),  not still air.  The change in temperature of still air (that is, air that is not rising or subsiding) follows the Environmental Lapse  Rate, which varies considerably, but averages about 6.5 deg C/1000 meters  (3.6 deg/1000 feet).  In still air, if you went up in a hot air balloon, carrying a thermometer and taking the air temperature every 1000 meters, on average the temperature would drop 6.5 degrees C every 1000 meters.  The rate of temperature change as you rise in still air is not as great as the rate of change of rising air; that is, the air parcel does not cool off as fast.
For instance, the air temperature at sea level is 28 degrees C.  Climb into your balloon, release the tethers, and go up 1000 meters in the still air.  On average, the air temperature 1000 meters up will be _21.5___degrees C.   If the air were rising, and the temperature at sea level was 28 degrees C, what would the temperature of the air be after it rose 1000 meters? 18C
http://www.sci.uidaho.edu/scripter/geog100/lect/05-atmos-water-wx/05-part-7-atmos-lifting-fronts/ch5-part-7a-atmos-liftin.htm
http://www.geographypages.co.uk/lapse.htm
http://www.st-andrews.ac.uk/~dib2/climate/lapserates.html
People talk of adiabatit lapse rates as if they control the atmosperic temperatre. Why?
These lapse rates refer to moving a number of molecules from low pressure to high pressure and getting heated. No problem with that. BUT
For every molecule moved down to high press ure there must be a molecule moved from high to low. It cannot be a one way transport (obviously!).
So, in my books, the heating effect of falling molecules equals the cooling effect of rising molecules. Hence no effect.
So Why is it colder up a mountain than on the plains.
GHG free air absorbs litle of the available sunlight. Air with GHGs absorbs only at the known absoption frequencies and the proportion of theses frequencies in the TSI is relatively small. There is therefore little air heating due to sunlight.
However sunlight hits the ground and 70% gets absorbed and reradiated as heat at long wave infra red frequencies. These will heat the air via absoption. There is more close ground creating warming in a valley than on a hill hence it will be warmer.
NOW if there is a 1000 metre plateau will this be as warm as the valley below - if not, why not?

from WUWT
The adiabatic lapse rate is defined by the "gas Laws" not by gravity (other than of course high gravity gives high pressure!).
The adiabatic lapse rate requires that a fixed number of molecules be moved between pressure differences. Once at a new pressure the new temperature will stabilise to the surroundings (but that is not what adiabatic lapse rate is about).
However, for every molecule transported from high to low pressure there MUST be a molecule transported from low to high pressure. This means there is NO net flow of energy.
Where the atmosphere blends into a vacuum there can be no convective/conductive transfer of energy (there is nothing to transfer the energy to!)
Radiation is the only option. N2 H2 O2 etc. have little propensity to absorb radiation. Hoever they will get warm by transfer of heat from GH gasses. All hot bodies emit radiation (bb radiation).

At the other end of the air column you have similar problems. The ground/sea warms through absorption of the shorter wavelengths of TSI (where most of the solar energy is). The heat is radiated from the ground/sea as LWIR and by contact at the boundary between earth and atmosphere. The heat must be transferred from molecule to molecule by contact or by convection. A slow process. Conduction will be enhanced by high pressure, convection will be slowed.
The radiated energy is NOT significantly absorbed by O2 N2 H2 etc. no matter what the pressure. Even a solid glass fibre can be made extremely low loss 0.2dB per km and the molecules are pretty solidly packed http://www.fiberoptics4sale.com/wordpress/optical-fiber-loss-and-attenuation/ . Without a GHG this radiation would escape without attenuation straight to space. GHGs will "absorb" this LWIR at certain frequencies and re-emit it in all directions. The time for this energy to be "reabsorbed" in another molecule is dependent on the path length which is dependent on the proximity of other GHG molecules which is dependant on the pressure of the atmosphere.
The time taken for the radiation to bounce from molecule to molecule increases the time it takes for the energy to travel from ground to space.
The energy input to the system is at a constant rate. Slow down the output and the system gets hotter. A hotter system will radiate more energy (BB radiation).
Where does the energy from static pressure difference come in to this? 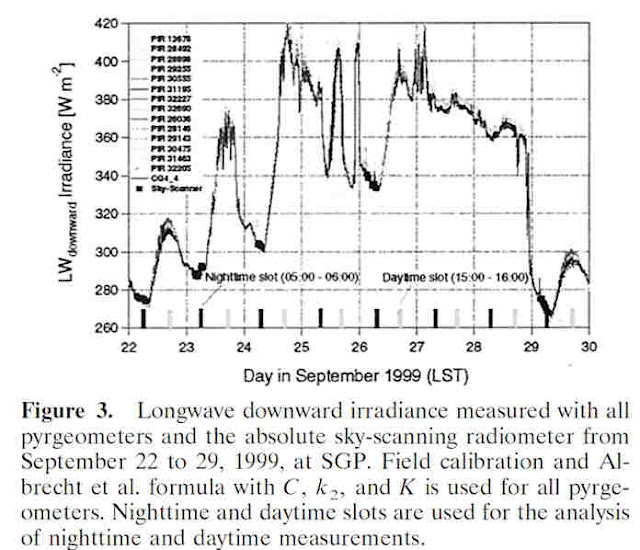 Forcing, and Fractional Cloud Cover over the South Polehttp://www.webpages.uidaho.edu/~vonw/pubs/TownEtAl_2005.pdf

Measurement of night time downward radiation
So we know the solar output received in the dark is 0
We know that O2 and N2 have very very very little thermal radiation.
So where does all that downward radiation come from (at least 270W/sqm)
It can only be from GHGs.

During the day we receive about 380W/sqm
So the 270W/sqm is additional to the solar irradiance. 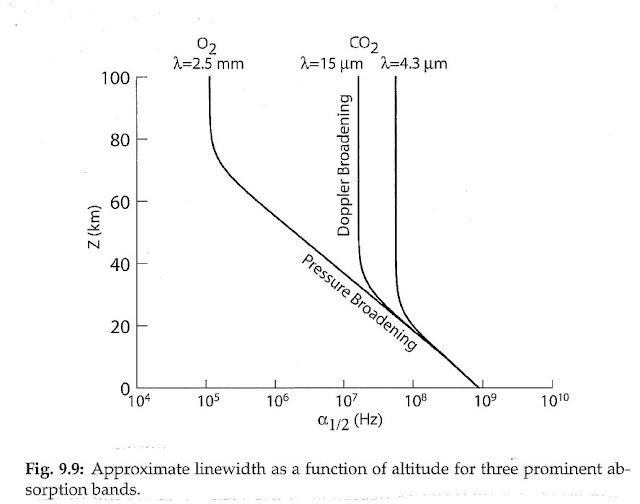 N2 O2 absoptions are mainly rotational and thereefore mainly in the microwave region. There is not a great amount of radiation in these frequencies. 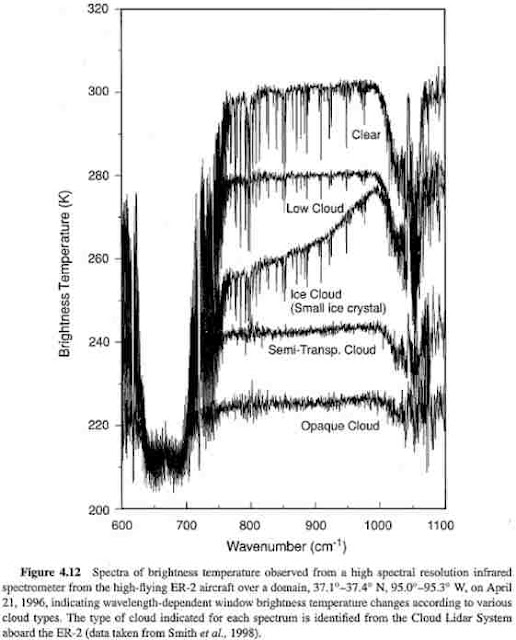 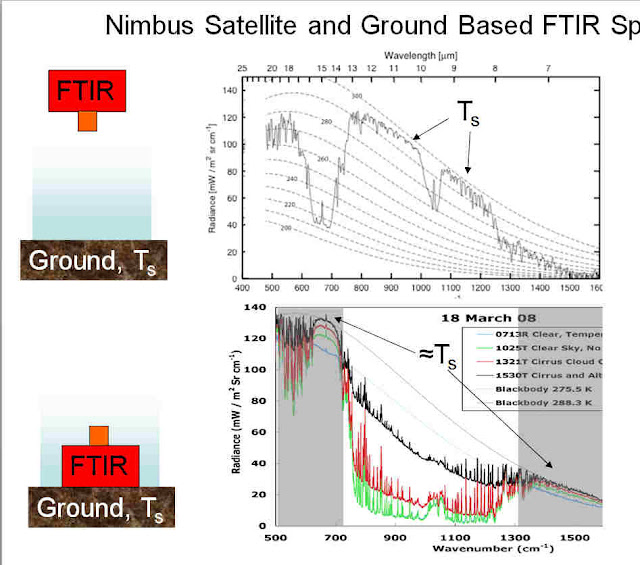