﻿Of interest the second plot shows the early part of the melt cycle is becoming later but the melt minimum is not changing.
The final plot shows that the minimum melt level is on a consistent decline 2007 being a bit off line. It should be remembered that the maximum extent is land locked - as soon as ice "reaches" land at any place the growth rate obviously slows.
Posted by thefordprefect at Sunday, October 31, 2010 0 comments

The first plot shows yearly comparison with temperature not inverted and not filtered.
The second plot show the full grape harvest period with axes scaled and temperatures inverted.

Click for full size plots
Obviously the Pinot Noir grape varieties have changed over the years and CET is not the temperature of the area where the grapes are farmed. Still gives a reasonable match!﻿
Posted by thefordprefect at Sunday, October 31, 2010 0 comments

Did Jones Delete Emails?
It turns out that Muir Russell didn’t bother asking, since that would have exposed Jones to potential liability.

But in a surprising new turn of events, it seems that VC Acton sort-of did what Muir Russell was supposed to do – ask Jones whether he had deleted emails. The Guardian reports Acton’s testimony as follows:

Prof Phil Jones told the University of East Anglia’s boss that he did not delete any of the emails that were released from the university last November, despite apparently saying he would in one of those emails.
In the narrowest sense, the very existence of the Climategate emails seems to show that, whatever Jones may or may not have attempted to do, he had not deleted the emails that survived on the back up server.

You may be able to change the result of a midterm election and perhaps the next climate debate in Mexico. But attacking a man will not change the fact that the world is warming and it is more than likely caused by man. I hope you are correct in your stance for I would not be able to live with myself if I (and watts) have helped to wreck the lives of our children.

Even if Jones was guilty of all that watts and McIntyre claim, just what is the relevance. His CRUTEMP record has been shown to agree with other records.
These all show a temperature rise greater than elsewhere in the instrumental record. What is the point in continuing this horrendous attack on Jones and Mann?

my post today:
So lets see if I have this correct [you claim]

Hmmmm £1300 is all it costs to bring a defamation action (it costs lawyer/QC costs to defend your innocence, and you ARE guilty until you can show otherwise. A Norwich Pharmacal will provide your names and addresses from your ISP for free!). Living outside UK does not make you immune to prosecution. I hope you have plenty of evidence that proves (legally!!!) all your comments. Good Luck!

your words:
mpaul
Posted Oct 28, 2010 at 9:59 AM | Permalink | ReplyJones was the head of the unit. He was directing people to delete emails that were subject of a FOIA.

T G Watkins
Posted Oct 28, 2010 at 4:45 PM | Permalink | ReplyI have every confidence in the British system of Parliamentary inquiries. Confident that they will duck and dive,
John Whitman
Posted Oct 27, 2010 at 10:56 AM | Permalink | ReplyAm I just being naïve to think that any reasonable independently minded person will find doubt about the innocence of the UEA/CRU personnel
just a few more defamations:Steve McIntyre
Posted Oct 26, 2010 at 7:54 PM | Permalink | ReplyOne of the undiscussed aspects of Muir Russell is the role of PR firm Luther Pendragon and its employees Mike Granatt and Kate Moffatt. The latter is profiled here as having also assisted Pew Charitable Trusts. All very “objective”, I’m sure.

and:
Who Recommended Oxburgh?

most of:
Fiona Fox and the Babe Magnet

[most of this post got snipped making it ridiculous!]

thefordprefect
Posted Oct 30, 2010 at 8:03 PM | Permalink | ReplyMcIntyre
You have stopped any form of scientific investigation on CRU science.
You are now single mindedly going after its personnel. I just do not see the purpose.

As far as I am aware the main contention about the science is the hide the decline (the graphic on the front of a simple WMO pamphlet).

You now seem to going after the inclusion of some research in the IPCC document that should not have been included due to it not having been published in time. Not because the SCIENCE was wrong.
This blog now seems to be a “lets destroy the UEA and especially the CRU” mouthpiece.

The FOI act became law in 2005, 3 years before the destroy the email email. Was Jones educated in FOI by this time?

The University system in the UK is being destroyed in this country by its poor funding. Sowing seeds of doubt about the UEA may have very detrimental effects on its financial and hence physical future.

Very sad. Just what is the purpose here?????
Posted by thefordprefect at Wednesday, October 27, 2010 0 comments

Interestingly the days of thunder have reduced over the 2 periods.
Posted by thefordprefect at Tuesday, October 19, 2010 0 comments

Did you know that the tea lady serving Oxburgh also served Russel and Jones. She went to the pub with someone who is a former member of the Communist party. This PROVES that all climate science is being run by the commies.
Just as "lord" Monkton says:
http://www.youtube.com/watch?v=kHyMYEzRyf8

Perhaps the good "lord" will also debunk the moon landings next!!!!
Posted by thefordprefect at Monday, October 18, 2010 0 comments

From the paper comes this plot:
Compare this to the HADCRUT 3V plot:

By filtering the temperature all the low frequency uplift since the 60s has been lost.
What therefore, has caused the recent warming?
According to the plot the last 10 years should have been cooling and the next 10 should see a 1C warming.
If I remember correctly the last 10 years have been stable and not reduced by 1C. If Scafetta is correct the world should be 2C hotter by 2025. Is this not a bit worrying?
and
WHY is the Scafetta plot so different to the HADCRU3V?????

OK so now add a 15 to 25 year filter and whats the comparison like?

Certainly a better fit but the trace obtained by filtering (red) is not what Scafetta gets (black). Also looking at the extreme s the temperature is loosing sync with SCMSS.
Posted by thefordprefect at Thursday, October 14, 2010 0 comments

Correlation between LOD and SSN???????

There seems to be no correlation worthy of note.

This is their take on it: 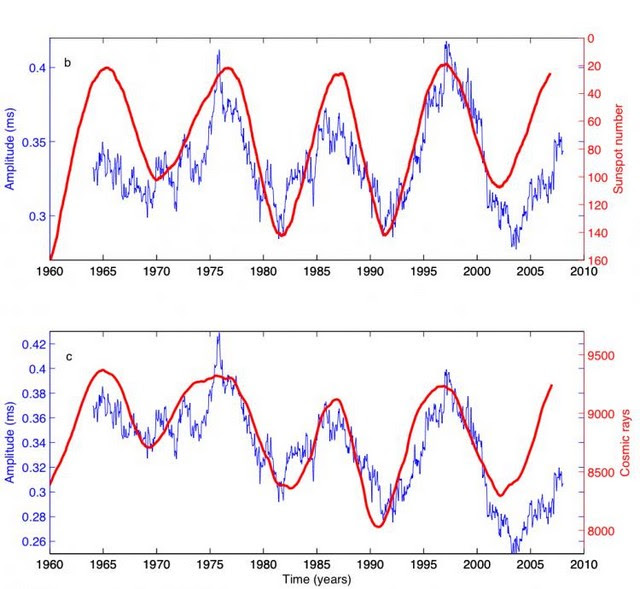