An update on the sea ice extent from Jaxa
https://ads.nipr.ac.jp/vishop/#/extent

and Arctic temperature from DMI
http://ocean.dmi.dk/arctic/meant80n.uk.php 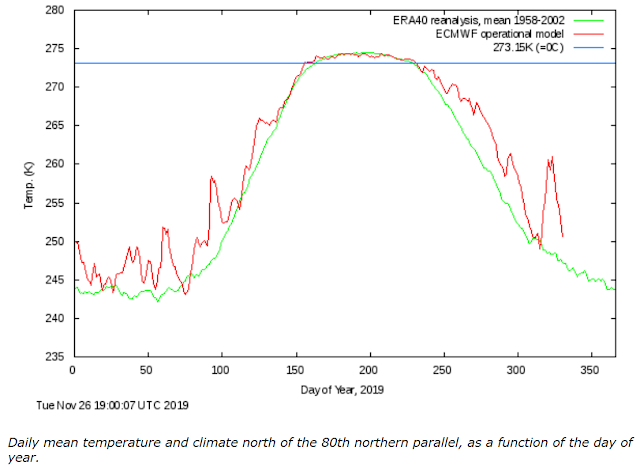 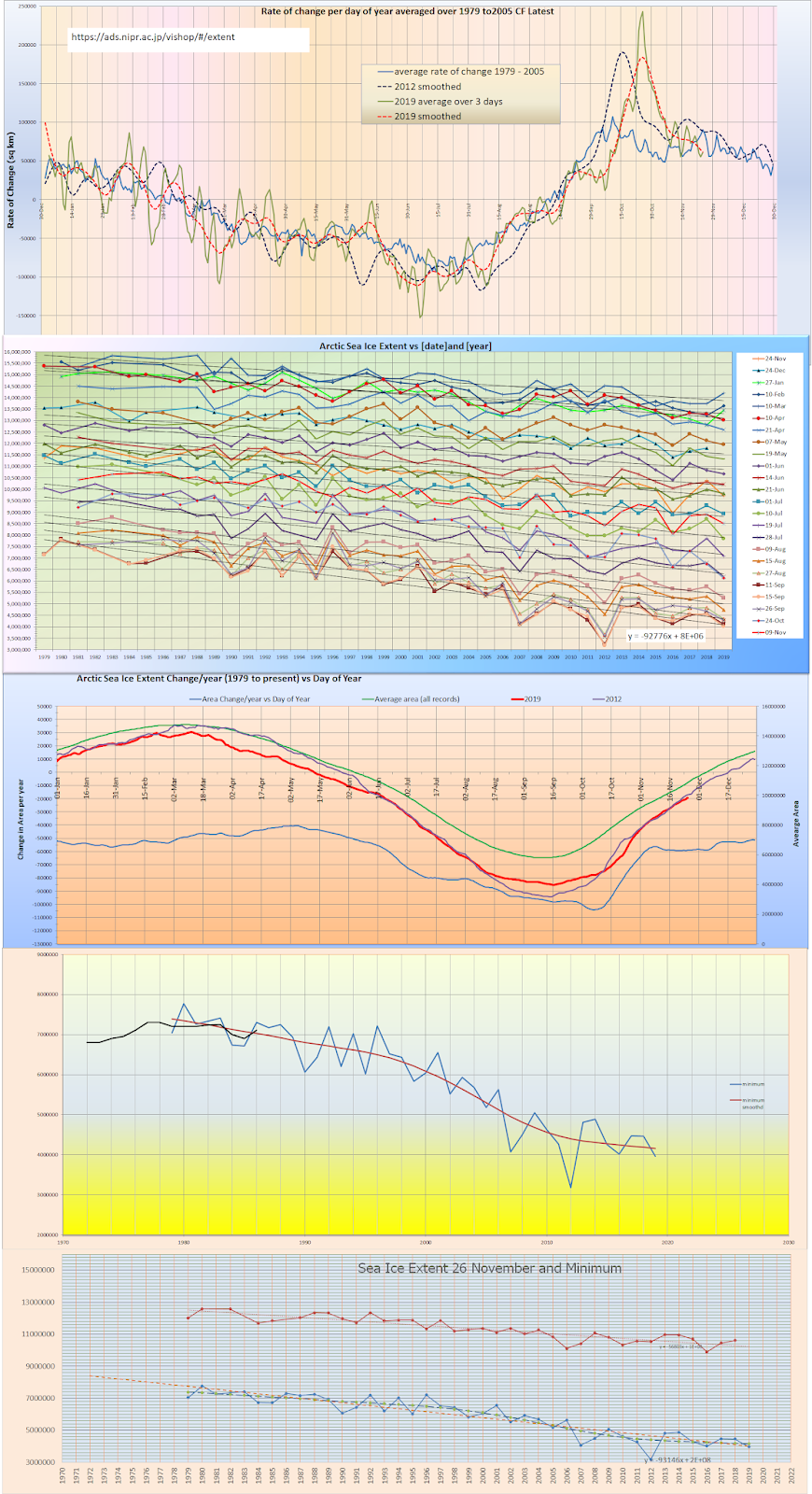 2019-10-08
Rate of gain as winter approaches has flattened and is significantly less than 2012 at this date: 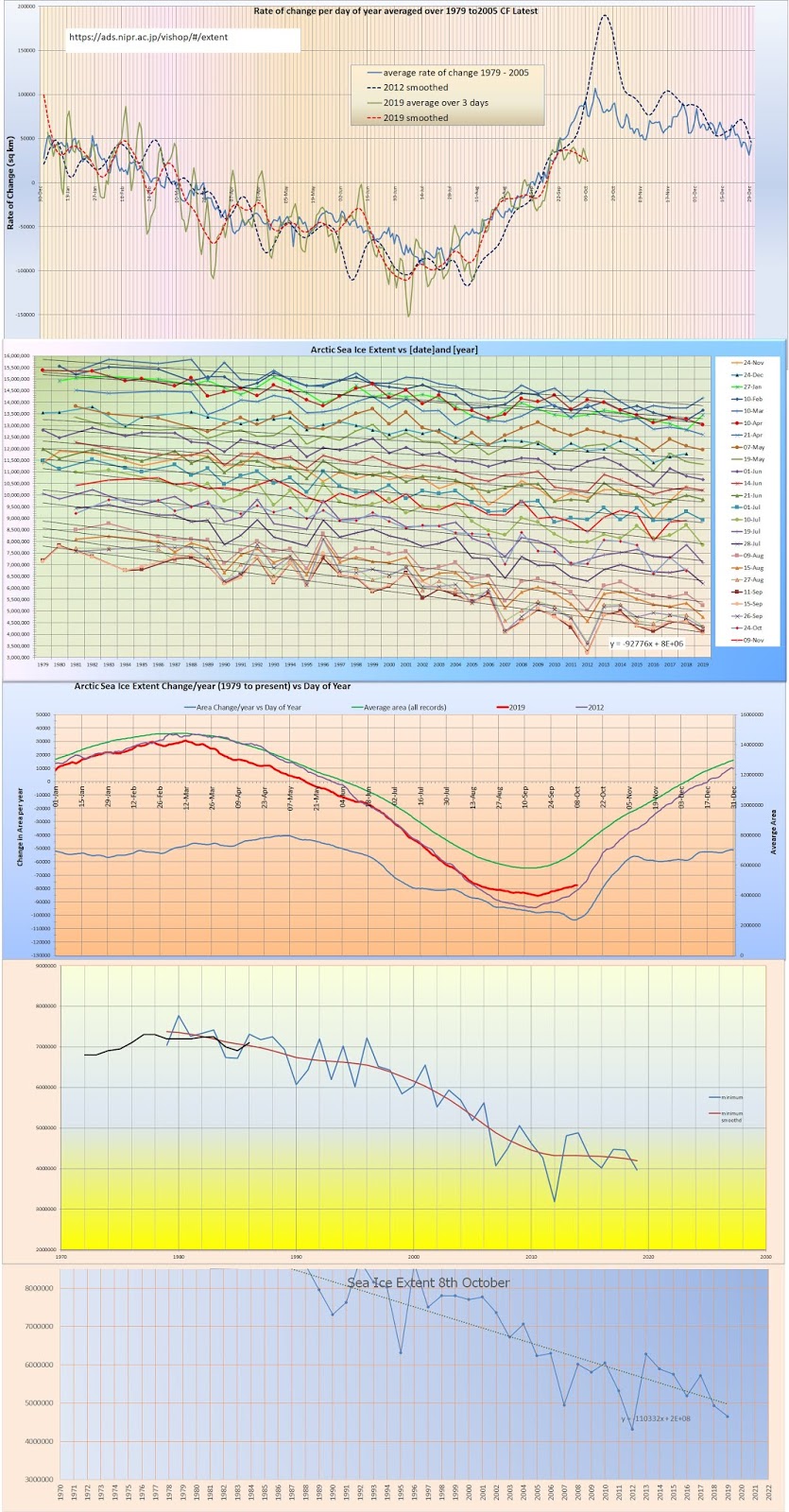 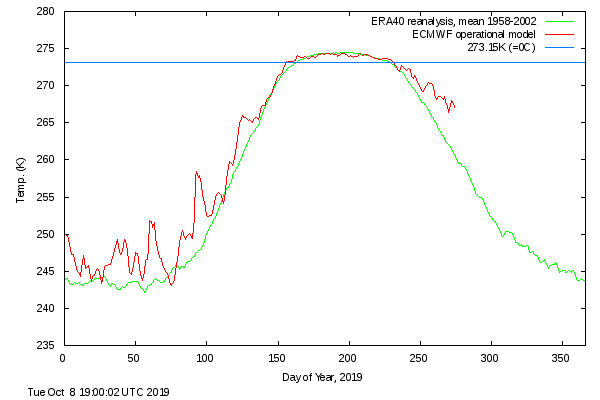 An interim report [Interim Report into the Low Frequency Demand Disconnection (LFDD) following Generator Trips and Frequency Excursion on 9 Aug 2019] has been made by the National Grid concerning the events leading to the power outage. The documents tend to disappears here is the frequency/time plot from the document: 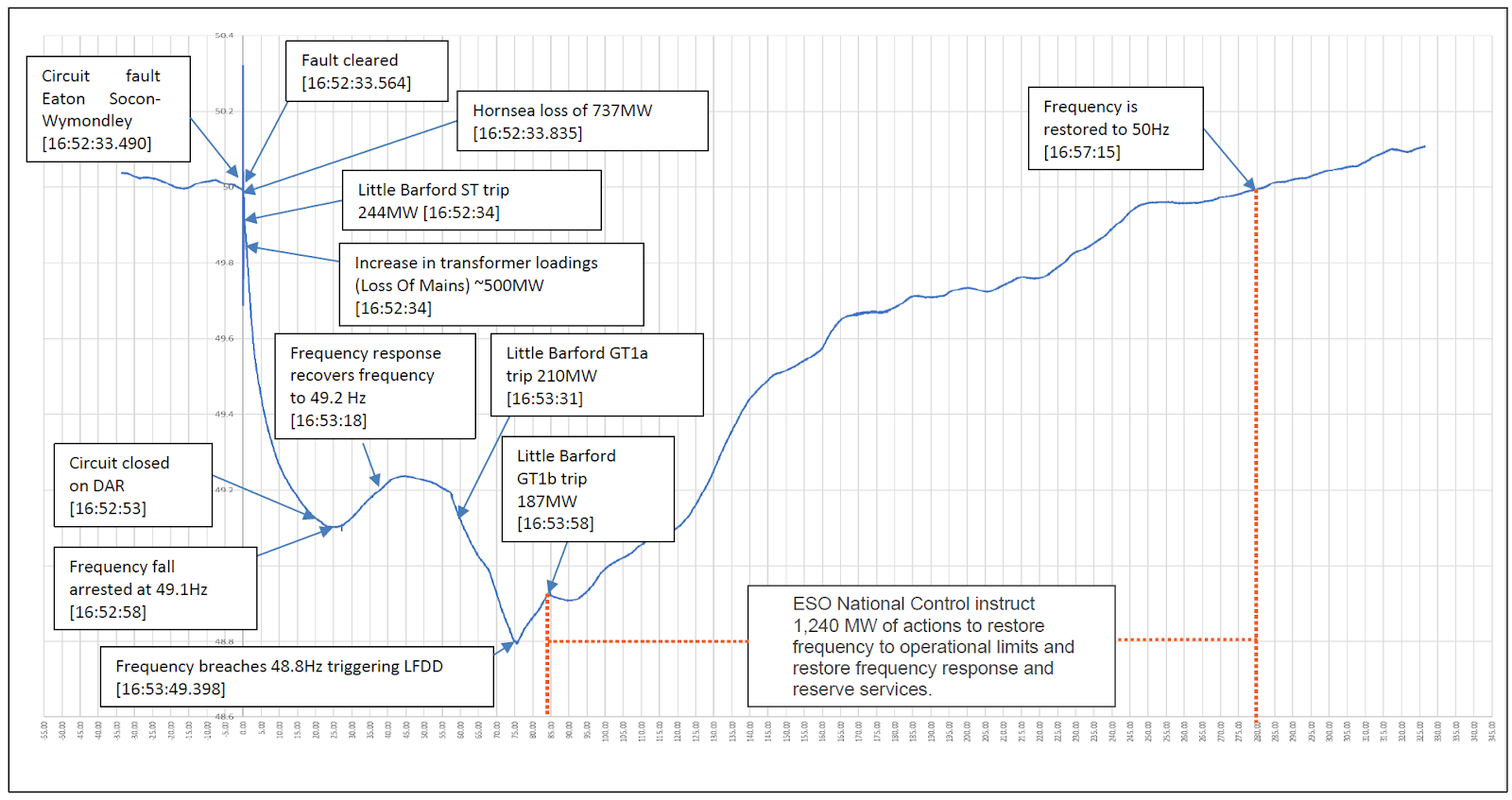 Of interest is the fact that after the initial failures at Hornsea and one of the turbines at Little Barford the system begins to recover. Then another 2 of the Little Barford generators is manually removed because of steam overpressure.
It is at this point the system crashes out and load is shed.

Suggestions have been made that adding  wind energy to the UK national grid has increased the frequency variability.

By looking at the Gridwatch data for frequency it is possible to see the frequency variation at a 5 minute sample rate.

This shows an insignificant change over the 7 years: 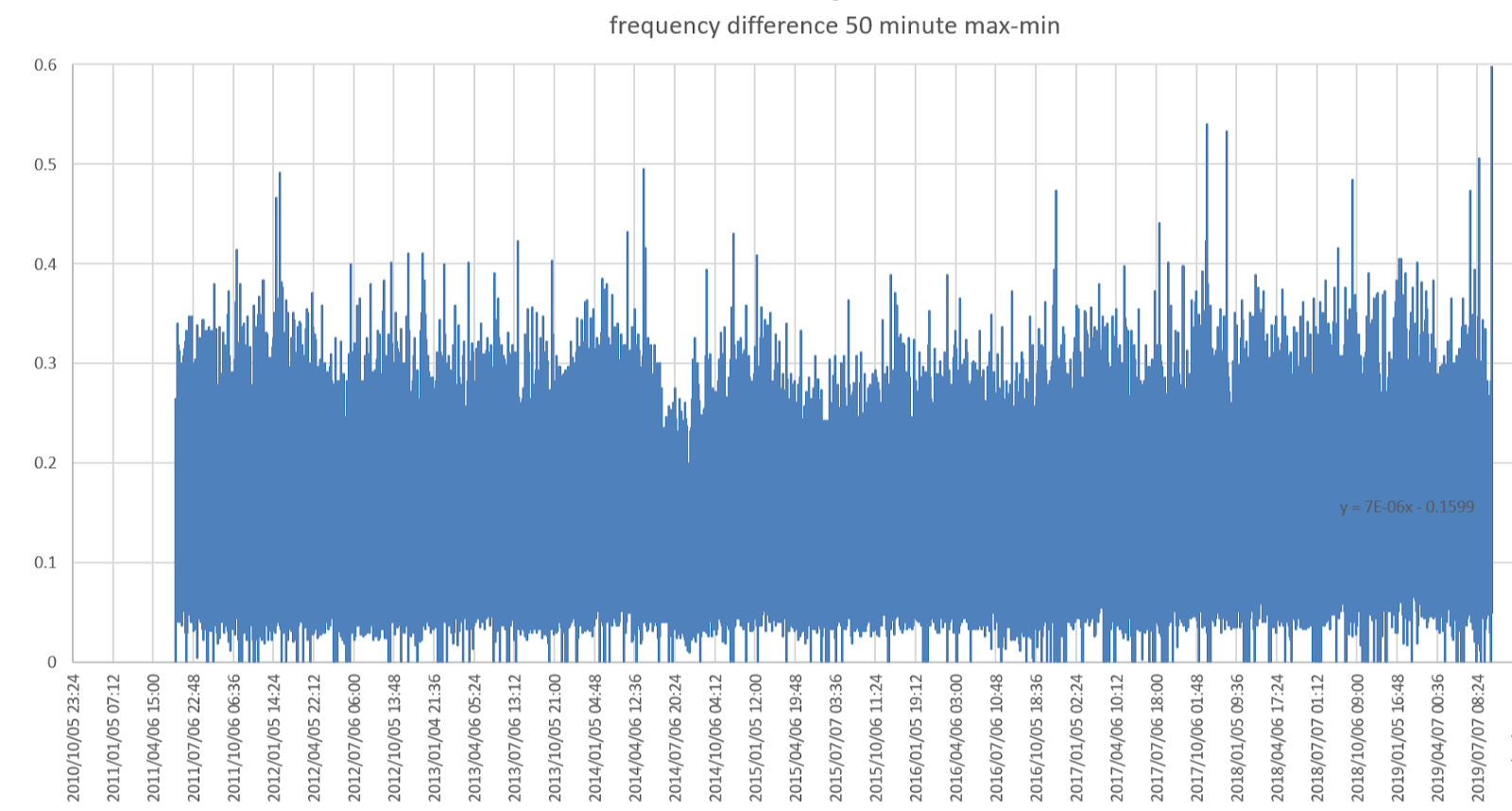 However looking at frequency deviations above 0.5Hz there were none before 2005 but 6 after 2005.

Since 2017 there has been insignificant change.

Latest update
Still shows a likely 2019 minimum of around 4.1 million km2
But unlikely to be below 2012 minimum 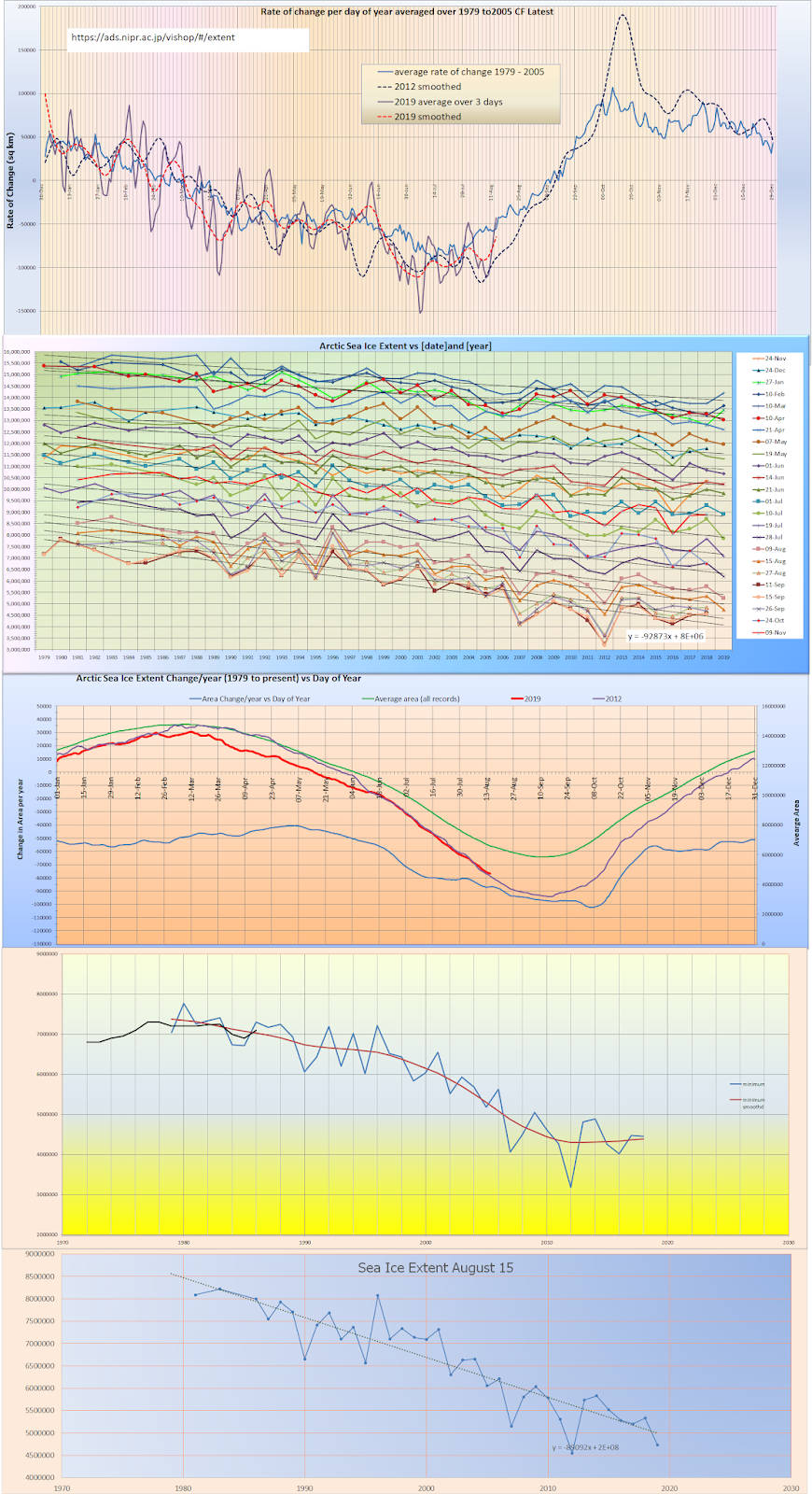 Some interesting stuff from gridwatch.

Claim from the National Grid is that power outage caused by Little Barford and Hornsea wind disconnecting from grid.

In May 2008 similar happened:
htTps://www.ofgem.gov.uk/ofgem-publications/41426/nationalgrid-systemeventsof27mayfordswg16july.pdf
except 2 stations (Longannet and Sizewell)  tripped which gave a loss of 1582MW and then other back up systems failed.
the outage ended after 7 hours


Little Barford Power Station is a 740 MWe gas-fired power station
Hornsea Wind Farm maximum is 1.2GW
1.5 GW maximum lost according to gridwatch and they have learned nothing since 2008.

and of course even more people affected 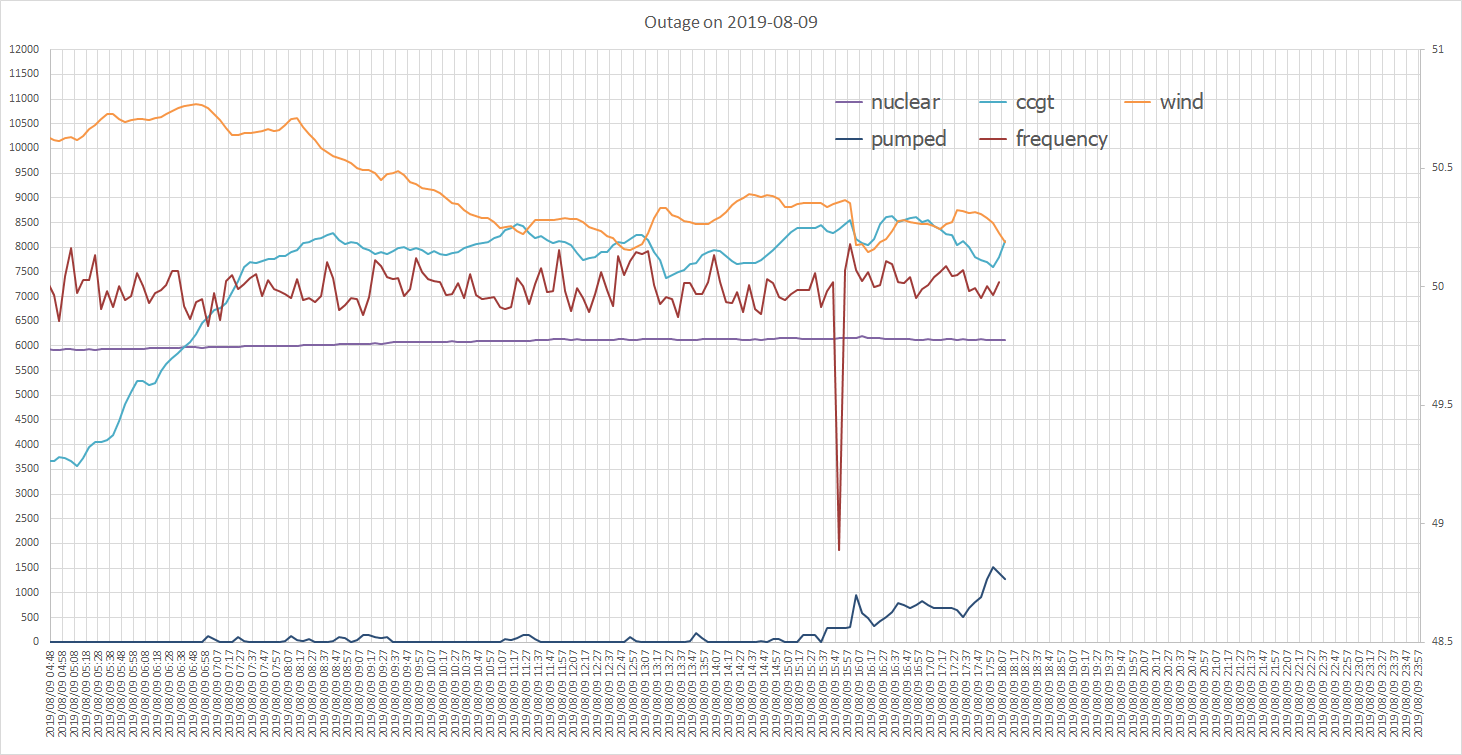 What is interesting is that Gridwatch shows that the frequency dropped nearly 20 minutes before the two stations went offline. Grid watch is updated every 5 minutes so should have shown a intantataneos frequency and power loss.
The frequency changes as a result of overload on the grid.

If the fast reserve cannot handle 1.8GW going offline simultaneously how do they expect to handle Hinkley C  with 2 reactors of 1.6GW?

PS
Many suggest that the variability of the wind is to be blamed. But if you look at the power levels during that day there was adequate capacity.
There was 8GW of spare CCGT power at the time of the outage. There was a demand 2.8GW below peak of the previous day. There was no drop or increase in wind strength. Simply put a gas power station tripped and a fault occurred on the transmission lines from the wind farm causing 0.9GW loss of supply. 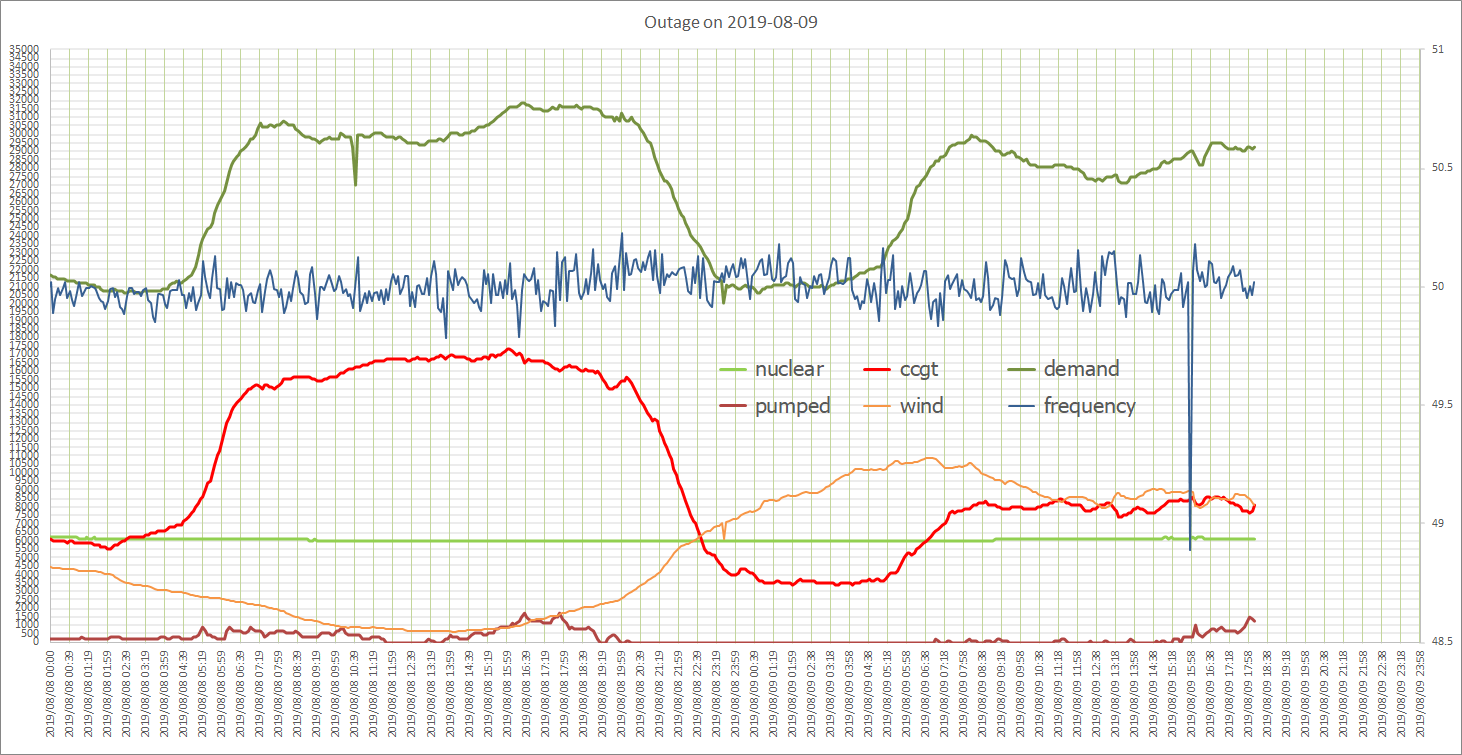 Data is lining up to be a normal reduction in extent (i.e. not an exceptional loss like 2012).

This would give a 2019 minimum of around 4.1 million km2 if rate of loss is maintained 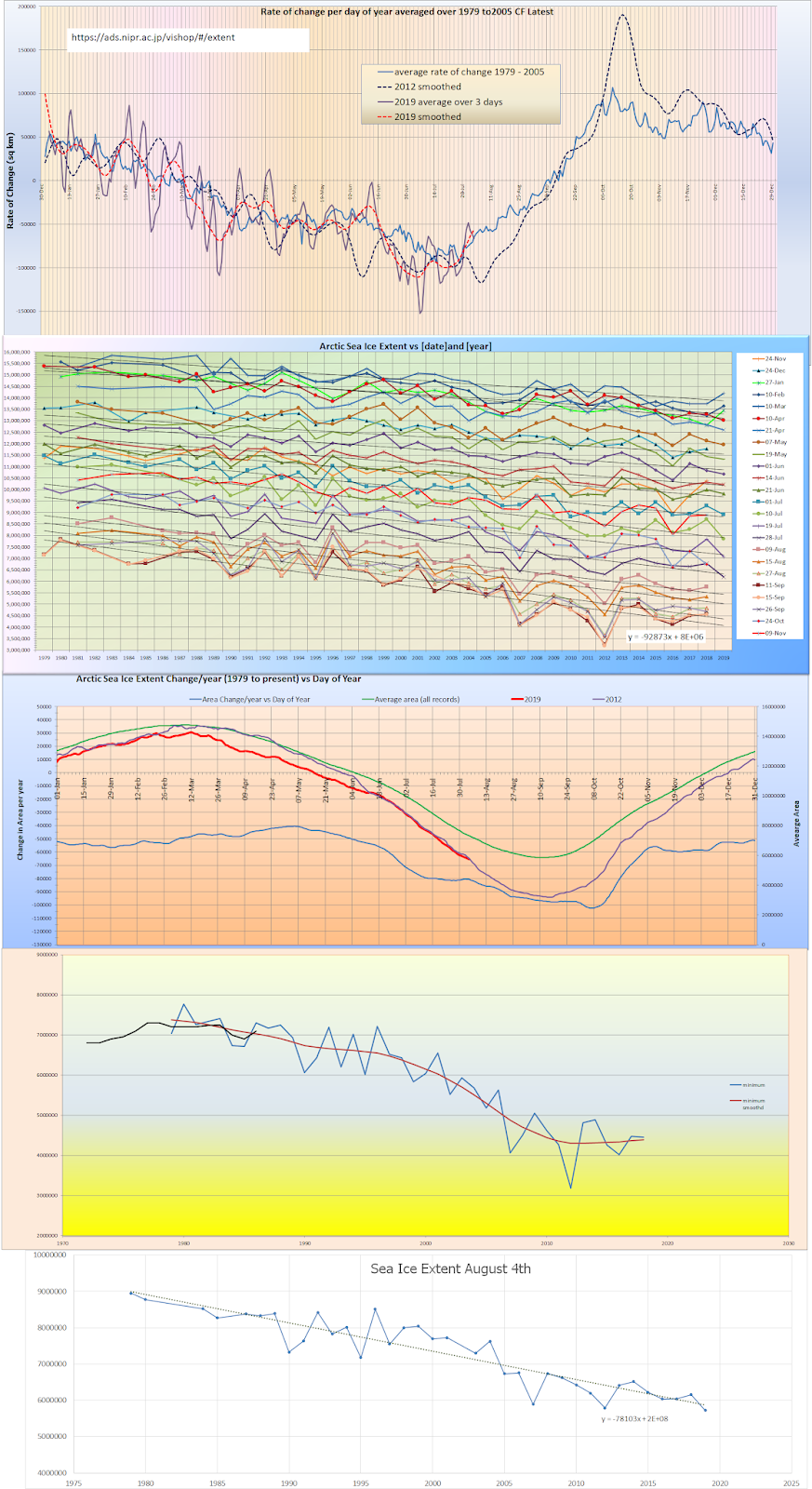 Swedish climate activist Greta Thunberg has accepted a ride across the Atlantic by boat to attend two key climate conferences.

The teenager will make the journey aboard the Malizia II, a high-speed 18-metre (60ft) yacht built to race around the globe.

“We’ll be sailing across the Atlantic Ocean from the UK to New York in mid August,” she tweeted.

Thunberg refuses to fly because of the environmental impact of air travel.

I’m sorry to say it but I hope she drowns, I can’t think of any other way to end this insanity other than a freak yachting accident. Of course she’ll be given instant sainthood and made a climate martyr and her name used endlessly to foist climate insanity on us, but I’d prefer that to the current ridiculous situation where all the adults in leadership are in thrall to this spoilt brat. Every time I see her evil little eyes she reminds me of Damien from the Omen, and it is an evil omen that she’s pedaling.


Pray for hurricanes, or an iceberg…..

I'm amazed any moderator allows such comments on a public blog.

It does show, however, the type of person who posts there. Sad that the human race can be so despicable.
Posted by thefordprefect at Tuesday, July 30, 2019 0 comments

Cornwall Alliance - Does their Faith Destroy their ability to pronounce on AGW.

Some surprisingly well know signatories signed up to the Cornwall Alliance:


E. Calvin Beisner (founder and national spokesman for the Cornwall Alliance for the Stewardship of Creation)

What they signed up to has some telling beliefs in particular the believe that Man can do no wrong with the environment especially CO2.

Can these signatories ever criticise mans environmental behaviour if they signed up to this?

TheBiblical Perspective of Environmental Stewardship: Subduing and Ruling theEarth to the Glory of God and the Benefit of Our Neighbors 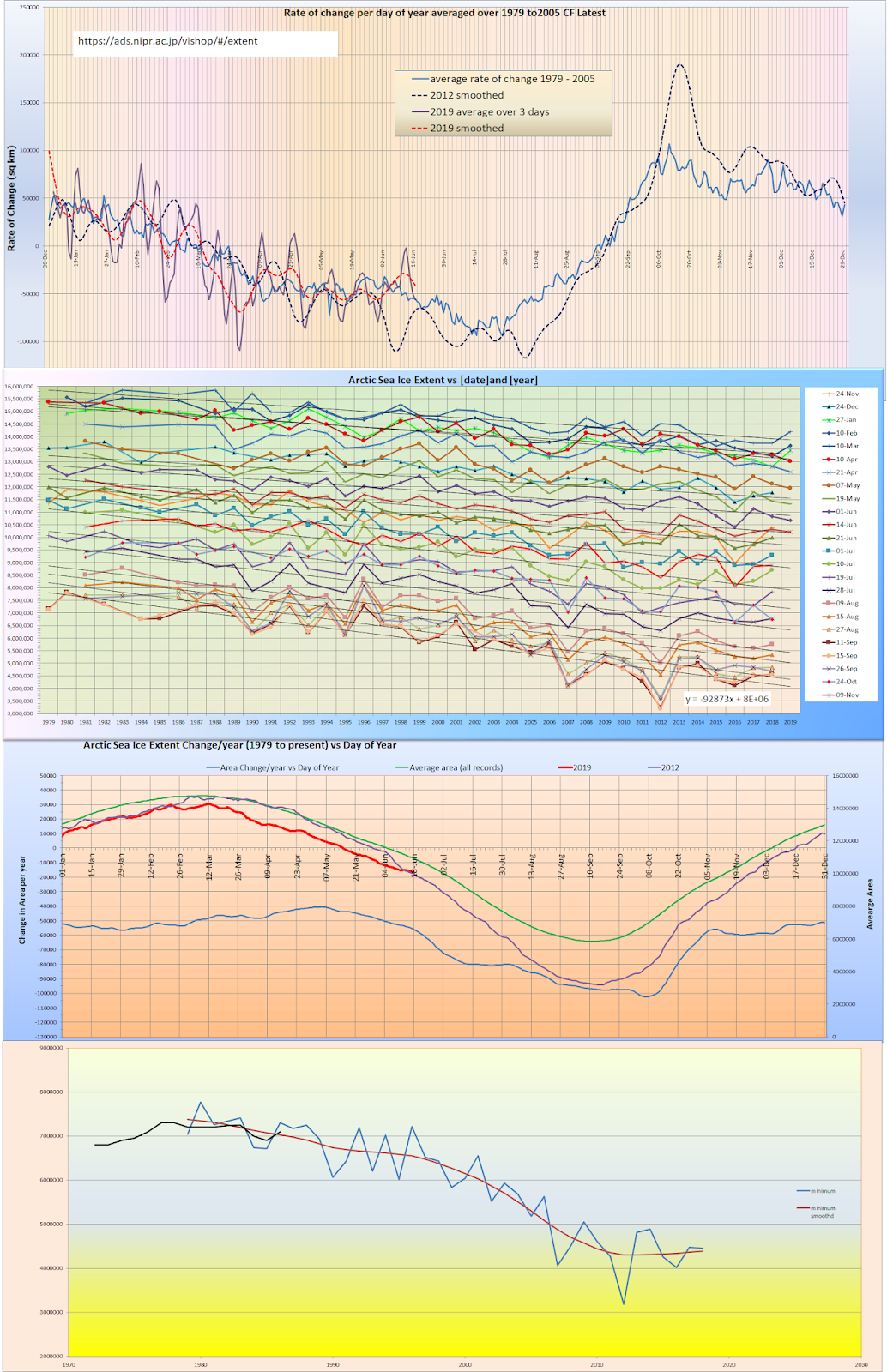 Some growth this year after the onset of melt season - but overall the decline in extent continues as normal (see second plot).

Some changes to plots from previous versions. 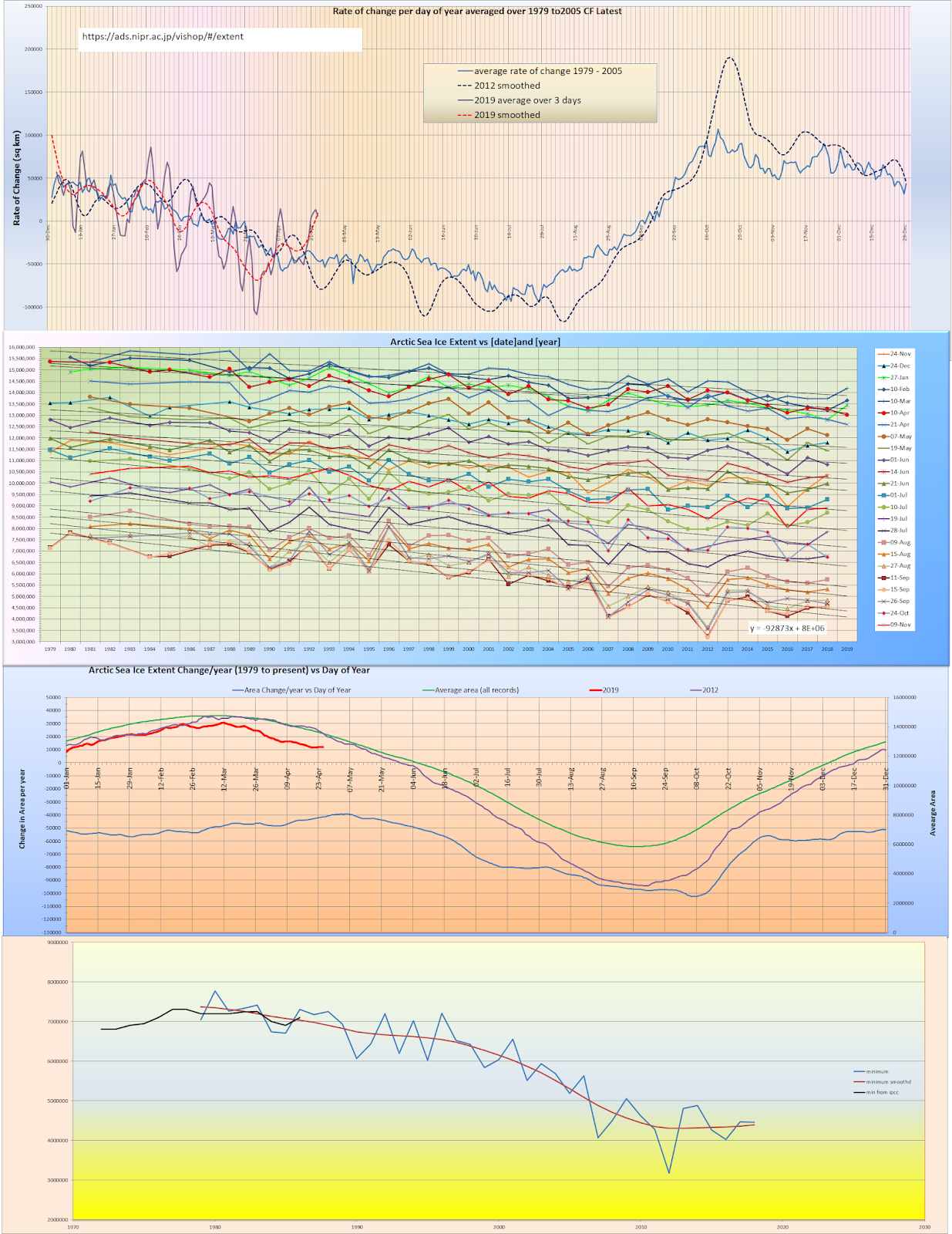 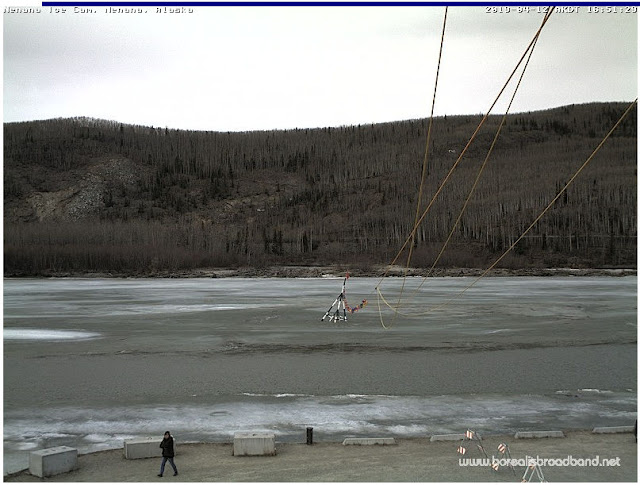 Plots below assume AST throughout the record.

A large drop this year (earlier breakup) but is within the bounds of noise in this very noisy system. It does follow the downward trend from the 1970s. 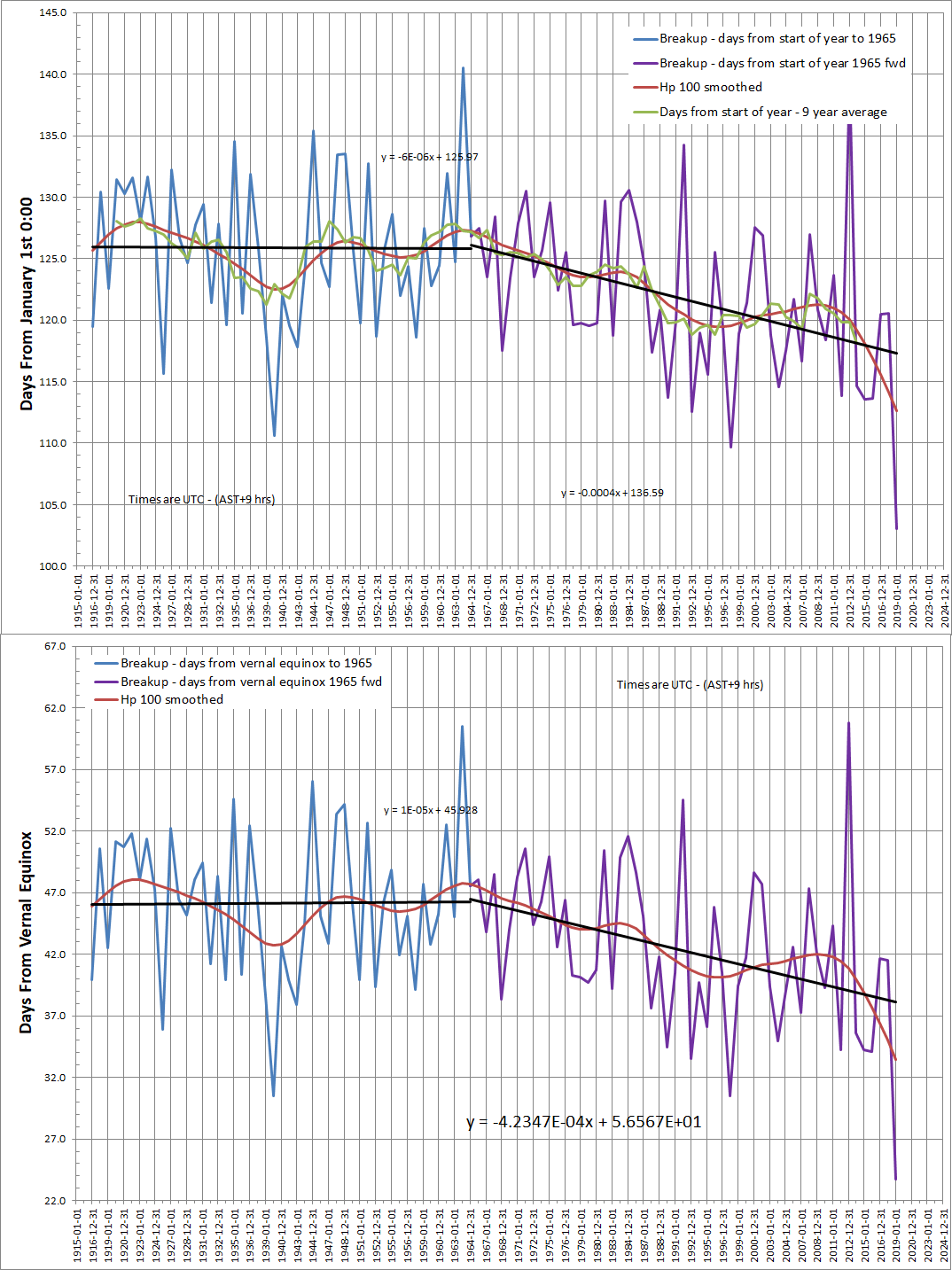