The plots below suggest that the rate of decrease is the same as previous years. However the starting area was lower over winter. This suggests a minimum extent of 4.6e6 sqkm

However comparing the 2 images from 2011 and 2007 created by
http://arctic.atmos.uiuc.edu/cryosphere/
The seems to be more chance of a lower minimum than 2007 if the freeze does not start earlier. 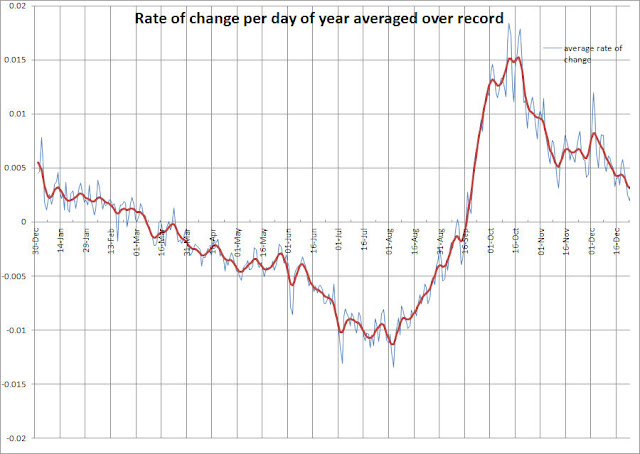 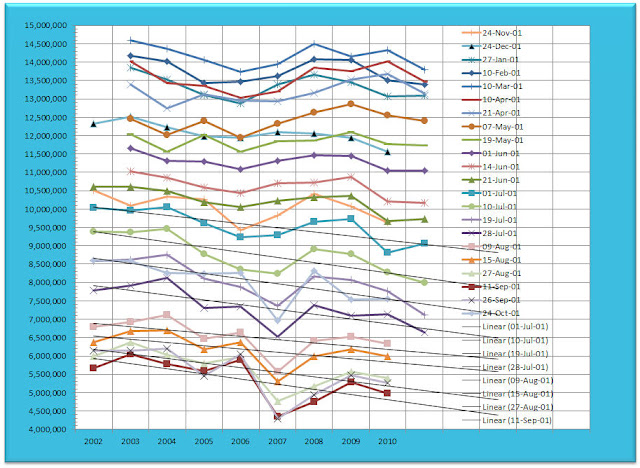 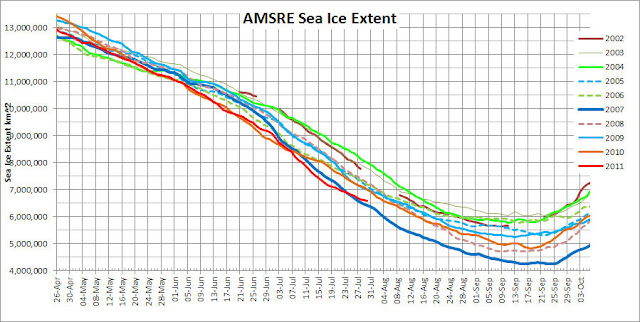 McIntyre - the downward spiral into the gutter + more posts that may never make it!

Just so much unsubstantiated crud. Climate AUDIT should audit itself!
Notice how McIntyre never ACTUALLY accuses anyone - innuendo is sufficient for the accolytes to pick it up and embelish it.


Steve McIntyre Posted Jul 15, 2011 at 7:47 AM
I wonder how much Outside Organisation contributed to misdirecting the police about international security services, and thus the involvement of Counter-Terrorism officers.

Posted Jul 14, 2011 at 3:47 PM
Remember the apparent disinformation about Russian intelligence agencies. 18 months later, there isn’t (to my knowledge) a shred of evidence for this theory. Nonetheless, this was fed into the press and quickly accepted as gospel by the climate science community. Remember Pierrehumbert’s fulminations at Dot Earth about this. And Andrew Weaver’s talk about international conspiracy. I wonder how much of this stemmed from Outside Organisation’s intervention.


Posted Jul 15, 2011 at 7:02 AM
I agree that the reference to “mobile phone conversations” – of which there isn’t a shred of evidence and was not under discussion at the time = suggests (but doesn’t prove) a connection to Neil Wallis and Outside Organisation, as this surely seems like a specific embellishment that they would have added to the legend being disseminated to the climate science community and to the public.


R.S.Brown Posted Jul 14, 2011 at 7:36 PM
It takes little, if any, imagination to join up the dots between Mr. Willis’s employment by the University of East Anglia’s (UEA) Climate Research Unit (CRU) and the spectacular failure of the East Anglia police in investigating the who, what, when and where of the unauthorized release of the Climategate materials
Steve McIntyre Posted Jul 14, 2011 at 10:10 PM
One of the main elements of the disinformation campaign in early December was what may have been the planting of stories that blamed Climategate on Russian security elements. One of the pieces of “evidence” that supposedly pointed to “sophisticated” hackers was East Anglia’s claims to have had a “sophisticated” security system – a claim that seems to be viewed now as a fabrication. I wonder how much Outside Organisation had to with disseminating the idea of “Russian security services”.


pat Posted Jul 17, 2011 at 6:44 PM
the local norfolk newspaper, Eastern Daily Press, which covered wallis and UEA (only to give cover) is owned by a big media company called Archant. here’s the Board:
Richsrd Jewson, Chairman
He is HM Lord Lieutenant of Norfolk and also Chairs the Council for the University of East Anglia.
Richard chairs the remuneration and nominations committees
Adrian Jeakings Chief Executive
He is a governor of Norwich School and a member of the Audit Committee of the University of East Anglia…
Mike Walsh Director
He has had extensive involvement in the charity sector as Worldwide Board member of WWF, Vice Chairman of the British Red Cross, and completed his six-year term as Chairman of the UK Disasters Emergency Committee in March 2011.
http://www.archant.co.uk/about_board.aspx

mpaul Posted Jul 18, 2011 at 9:49 AM
It would seem that one of Wallis’ singular talents was is knowing how to pay-off the Police http://english.alarabiya.net/articles/2011/07/17/158069.html . This raises important questions about the unusual and unaccounted for payment by UEA to the Norfolk Police Authority http://bishophill.squarespace.com/blog/2011/6/22/whats-up-with-norfolk-police.html

. There needs to be a call for a complete explanation of Wallis’ activities while employed by the UEA.

my latest which seems to be in moderation again!!! I'm sure the only blogs to not censor comments (wuwt and ca) cannot be selecting posts!

Martin Brumby Posted Jul 22, 2011 at 7:10 AM
Blimey Mate, you are now accusing the notw as a bunch of dishonest hacks before they were even KNOWN to be such.
My company has employed a firm of accoiuntants. I do not KNOW who is actually doing my accounts – it varies from year to year. They certainly do not send me the CVs of this person. The CV is not even likely to say “I have worked in phone hacking” is it? I put my trust in the accountants company. Not the tea boy who probably presses the button on the computer to roll out the 2 accounts documents and the submission to HMRC. I even managed to do it last year (saved £900!!)
UEA employed an agency to get their view to the press. OO has/had plenty of famous names on the books. Why should they not trust the person OO allocates to do this simple job? What is so difficult to understand about this?
===============
That one made it - how about this:
thefordprefect Posted Jul 23, 2011 at 4:29 AM | Permalink | Reply
Your comment is awaiting moderation.
Richard Drake Posted Jul 23, 2011 at 2:21 AM | Permalink | Reply
What if the person ‘recruiting’ him for UEA knew some of the darker parts of his past, and that this would guarantee he wouldn’t step out of line? That’s the hunch I’ve had.

ZT Posted Jul 22, 2011 at 10:54 PM | Permalink | Reply
It appears that British officials are selected exclusively for blackmail potential these days. (Similar to the system employed at the UN).

Where’ the EVIDENCE for any of this.

I know for a fact Elvis may be alive
It is absolutely certain that area 51 possibly houses alien artifacts
There is incontrovertible evidence that the moon landings were possibly staged!

=====
Off moderation so posted but how long will it last before deletion!?

Steve McIntyre, posted on Jan 12, 2010 at 11:35 PM
You get to watch somebody named phil jones say that John daly’s death is good news.. or words to that effect.

This leads to indignation that such a comment can be made (no mention that it was presumed a private email.

Now you plaster all over the web comments where it is stated that Jones brush with suicide was a put up job to get the sympathy vote. Did no one see him present his case to parliament – was he shown by Wallis how to starve himself. Did Wallis show him how to dye his hair just the right side of grey to match his pallid complection. Did Wallis give him acting lessons to get just the right amount of quaver in his voice?

YOU PEOPLE AMAZE ME
and just recently
YOU PEOPLE DISGUST ME.
========
Well this got posted then everything got deleted and the whole thread now in disarray. Well done McIntyre!

Run???? It took almost 3 months for this to surface. Wouldn’t it have been better to say this after perhaps 1 month for maximum impact?

From The Sunday Times February 7, 2010
Professor Phil Jones said in an exclusive interview with The Sunday Times that he had thought about killing himself “several times”. He acknowledged similarities to Dr David Kelly, the scientist who committed suicide after being exposed as the source for a BBC report that alleged the government had “sexed up” evidence to justify the invasion of Iraq.

Richard Drake Posted Jul 23, 2011 at 6:18 AM | Permalink | Reply
The very fact you equate someone’s death with a threat of suicide if someone asks someone too many awkward questions shows the moral vacuum in which you are operating.

What!!!
A natural death. A private comment to others:

“Mike,
In an odd way this is cheering news !”

That’s it, all of IT, how on earth do you misinterpret this comment? The moral vacuum that I work in is that I at least believe that my grandchildren deserve a better world to live in. That those equatorial dwellers deserve a homeland that is inhabitable.
I unfortunately also believe that it is probable that Man can destroy the environment!
Posted by thefordprefect at Wednesday, July 20, 2011 2 comments