False statements are often made about wind turbines (very narrow range of speed over which power is produced; large turbines shut down at lower wind speeds; rare earths costing the earth.)

From the Enercon brochure:


Power curve without ENERCON storm control
Illustration 1 shows that the wind turbine stops at a defined cutout wind speed V3. The reason is that a specified maximum wind speed has been exceeded. In wind turbines without storm control, this occurs, for example, at a wind speed of 25 m/s within a 20-second mean. The wind turbine only starts up again when the average wind speed drops below the cut-out wind speed or an even lower restart speed (V4 in the illustration; so-called strong wind hysteresis). In gusty wind conditions there may be a longer delay, which means that considerable yield losses are incurred.
Power curve with ENERCON storm control
The power curve diagram showing operation with ENERCON storm control (illustration 2) demonstrates clearly that the wind turbine does not shut down automatically when a certain wind speed Vstorm is exceeded, but merely reduces power output by slowing down the rotational speed. This is achieved by slightly pitching the rotor blades out of the wind. Once the wind speed drops, the blades turn back into the wind and the turbine immediately resumes operation at full power. This prevents yield-reducing shutdown and start-up procedures. 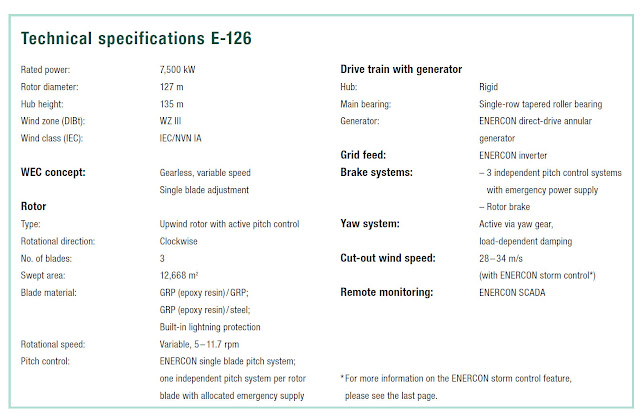 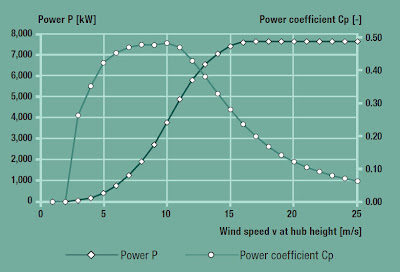 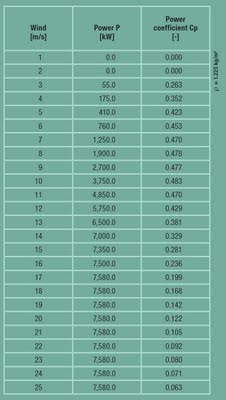 
Enercon Control systems being electronic can synchronise to grid quickly and can even help the grid ride out a system fault.

NO Rare earths are required for the generator

NO gears are required for the main shaft of the generator

Staying connected when grid problems occur
Most transmission networks and ever more distribution grids require wind energy converters to remain connected to the grid in the event of grid short circuits. Like conventional power plants, wind turbines are not allowed to suddenly disconnect from the grid during voltage dips or overvoltage caused by grid problems. ENERCON wind turbines with the optional ENERCON UVRT feature have this capacity. No matter what type of short circuit occurs, ENERCON wind turbines can ‘ride through’ faults for several seconds, even if they were operating at rated power before the fault. This is also possible if the wind turbine voltage completely breaks down as a result of a power system failure. These outstanding power plant properties have been certified by independent institutes during actual grid fault testing. Flexible setting options offer maximum performance according to the respective grid operator’s specifications or to the project’s framework conditions.
Depending on the selected parameters, the wind turbine can feed in either mainly active or reactive power to maintain grid voltage. If necessary, voltage-dependent reactive current can even be supplied to the grid; this current can be maximum rated current as stipulated by the latest German grid code. If desired or required, fault ride-through is also possible without power feed-in. The ENERCON wind turbine remains in operation during the fault. After the grid problem has been resolved and grid voltage has been restored, the wind turbine can immediately resume power feed-in. Thus the ENERCON Undervoltage Ride-Through feature facilitates adaptable settings in order to meet grid standards (e. g. of the German
Association of Energy and Water Industries) and to maximise the amount of installable wind farm power.


29.04. 2011
ENERCON wind energy converters (WECs) generate electricity in an environmentally friendly way without the use of the controversial element, neodymium. The gearless WEC design on which all WEC types – from the E-33/330 kW to the E-126/7.5 MW – are based includes a separately excited annular generator. The magnetic fields required by the generator to produce electricity are created electrically. By design, and unlike the majority of competing products, ENERCON WECs do without permanent magnets whose production requires neodymium.
Neodymium has made the headlines recently because its extraction partly involves significant environmental damage. China, where neodymium-containing rocks are quarried in mines, is the main supplier of this so-called rare earth element. According to investigations by Germany’s NDR TV station, separation of neodymium from mined rocks results in toxic waste products (Menschen und Schlagzeilen and Panorama television magazines aired on 27 and 28 April). In addition, radioactive uranium and thorium are released by the mining process. These substances find their way into the ground water, heavily contaminating plant and animal life. They are seen as harmful to humans. According to the reports, part of the locals at the neodymium production sites in Baotou in northern China are already seriously ill.
ENERCON feels that these environmental and health aspects support its choice of WEC design. “We are a high-tech company that sets great store by environmental protection,” says ENERCON Managing Director Hans-Dieter Kettwig. “Our choice to rely on separately excited generators was the right one, not only from a technological but also from an environmental point of view.” According to Kettwig, renewable energies need to be viewed in their entirety in order to offer a convincing alternative. Producing clean energy is one thing; however, sustainability in production is just as important.
Posted by thefordprefect at Saturday, May 21, 2011