An interesting paper from 2006
http://ams.confex.com/ams/pdfpapers/100737.pdf
MEASUREMENTS OF THE RADIATIVE SURFACE FORCING OF CLIMATE
[...]
The measurements have been obtained using commercial Fourier-transform
infrared (FTIR) spectrometers. These measurements have been used to quantify
the radiative flux associated with a number of greenhouse gases. It is this radiative flux that provides an additional source of warming for the planet’s surface, and ultimately is responsible for any change in climate. We
have provided the first direct measurements of the greenhouse effect for a number of trace gases in the atmosphere. These gases include trichlorofluoromethane (CFC-11), dichlorodifluoromethane (CFC-12), carbon tetrachloride (CCl4), methane (CH4), nitrous oxide (N2O), carbon monoxide (CO), nitric acid (HNO3), and tropospheric ozone (Evans and Puckrin, 1994-1997; Puckrin et al., 1996). Not only do these results prove that an increase in the greenhouse effect is real, and that trace gases in the atmosphere are
adding a significant radiative burden to the energy budget of the atmosphere, but they also provide a means of validating the predictions that are made by global warming models (Ellingson et al., 1991).
[...] 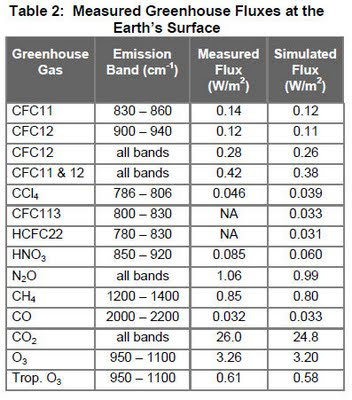 4. CONCLUSIONS
Measurements of the downward radiative flux have been made for several
important greenhouse gases. At mid-latitudes in summer as compared to winter, our measurements show that the downward surface flux from H2O has doubled to 200 W/m2. The water increase causes a reduction
of the fluxes from the other greenhouse gases. These measurements show that the greenhouse effect from trace gases in the atmosphere is real and adds significantly to the radiative burden of the atmosphere. The greenhouse radiation has increased by approximately 3.52 W/m2 since pre-industrial
times. This compares favorably with a modeled prediction of 2.55 W/m2. Measurements such as these can provide a means by which to verify the predictions made by global warming models (Puckrin et al; 2004).
Posted by thefordprefect at Sunday, May 08, 2011