More Constructions of a Temperature series

More on the "fun" project - not scientific!
"With four parameters I can fit an elephant, and with five I can make him wiggle his trunk".
Attributed to von Neumann

Following on from comments The frequencies etc of the original plots have been tweaked.
Note no attribution of the frequencies found is offered!

Method:
All frequencies and TSI were removed leaving just the polynomial.
a frequency was fitted to the main humps of the HADCRUT data (59Years)
Amplitude and phase of this were matched to the temperature record
The residuals were obtained and a simple curve fit added.
This showed a period of about 100 years.
A Further frequency was fitted to this curve fit changing phase and amplitude and frequency to give a near zero curve fit too the residual 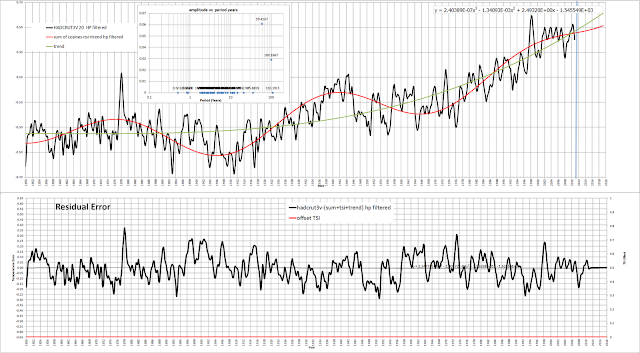 An attempt was made then to further reduce the residuals by subtracting TSI: 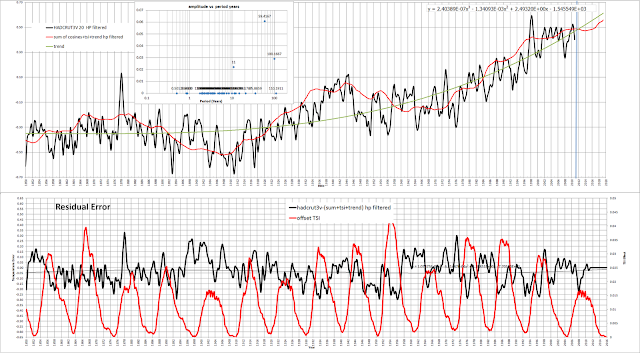 This does not lower residuals significantly.

All frequencies are then re-instated and phase and freq of the 2 frequencies and TSI adjusted for minimum residuals: 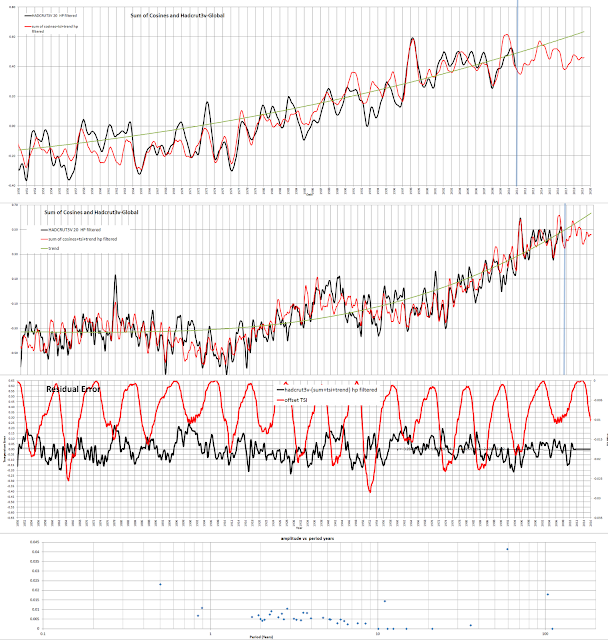 A reasonable fit! Note that this is significantly better fit than the previous post around the twitch in 1945. This is because of the artificially input 60 year and 100 year waves.
This gives a reasonable fit for the whole of the HADCRUT time period 1850 to 2011.

This trend produces the correct fit - It may be CO2 or something else. But I cannot see how a further cyclical parameter could produce the current rise.

Assuming that the trend is correct it produces the following prediction:

I DO NOT CLAIM THIS IS ACCURATE!!!!

However a very important point is that the trend is positive the whole of the time period. But the 2 major cycles 60 years and 100 years produce a substantially flat temperature from 2001 to 2023. During this period the trend continues rising and will add significantly to the 60 and 120 year cycles when they go positive.

This will allow "skeptics" 22 years of "I told you there was no warming" followed by an unfortunate, unexpected (to them) temperature rise.

TSI source still unknown but has little effect. The TSI has been extended to the future by splicing in data from 1900 a low level similar to this cycle?
=================================
All "sums" are done on monthly data and plots are filtered using a Hodrick Prescott filter (from the same source as the band pass filter) to remove high frequency components (HP filter gives a better end filter than moving average which has to terminate within 1/2 the averaging period from the end dates - in my opinion!)

This could of course be a long period sine but if so then since the 1800s we have only gone perhaps half way through its cycle. this will only become visible in the next few decades if temperatures begin to decline.
The overall response with the increasing polynomial shows recent flatlining and even drops over the last year. The future prediction is for a decline for the next few years (the trend is still increasing remember!) as the 60y and 100y cycles go into a low period.

The frequency table (Frequency that would reconstruct the TSI data (9 years to 14  years + 21 years) has been artificially set to zero. The 2500 year data below is set to give 0 amplitude (no frequency found).

A "for fun" project - not scientific!

Obtaining the repetitive frequencies:
Using bandpass filters set to a bandwidth of f/150 (where f is the lower frequency of the BP filter) the filter is swept from 0.5year to 150 years looking for amplitude peaks.
As each peak is found the output from the filter is compared to the output of a cosine wave set to the filter output amplitude and to the centre frequency of the filter. The cosine wave is is then phase shifted to align the two waveforms.
This is repeated for as many peaks as are found in the HADCRUT3V record. Outputs from the BP filters that fall into likely TSI frequencies 10, 11, 12, 14, 21 years have their corresponding synthesized outputs nulled. 0.5 year output is also nulled.

TSI is phase shifted, amplitude modified, then it added or subtracted from sum of cosines (shift is +48 months and is subtracted). However from the start of records to a round 1900 a lower error is provided by adding the TSI!

The remaining synthesized outputs are then summed and modified by a multiplier constant (approx 2.69) set by minimising the error between synthesized and original HADCRUT.

This is added into the synthesised data to provide the output data.

Because the reconstructed data is just the sum of cosines and TSI is relatively unimportant the data can be extended to the future in this case to about 2017.
The plots show 2011 to be cooling to mid year. 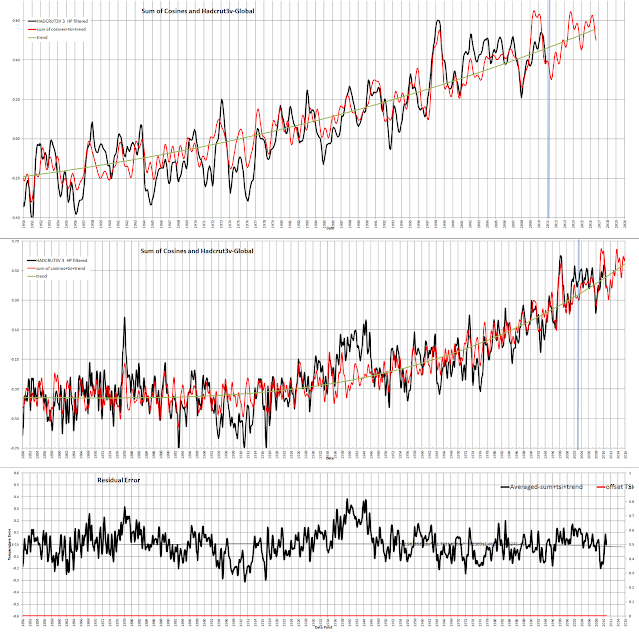 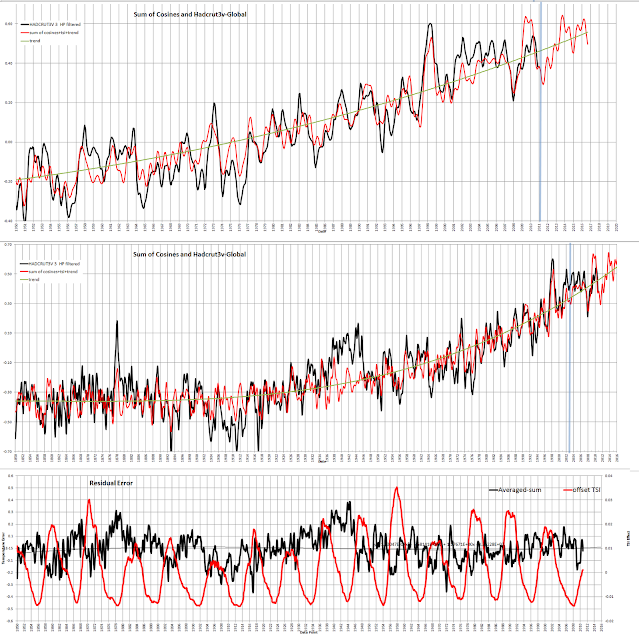 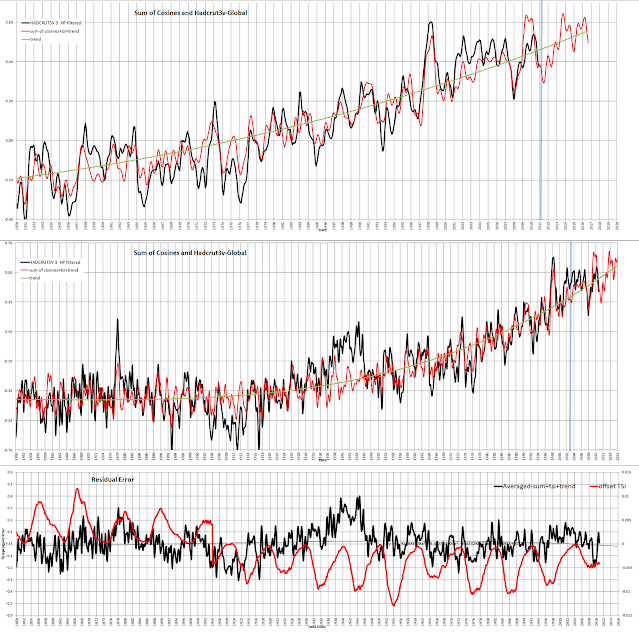 This is a plot of the frequencies and amplitudes used to obtain these plots. Disabled frequencies are shown as Zero amplitude. The output at 11 years represents TSI amplitude 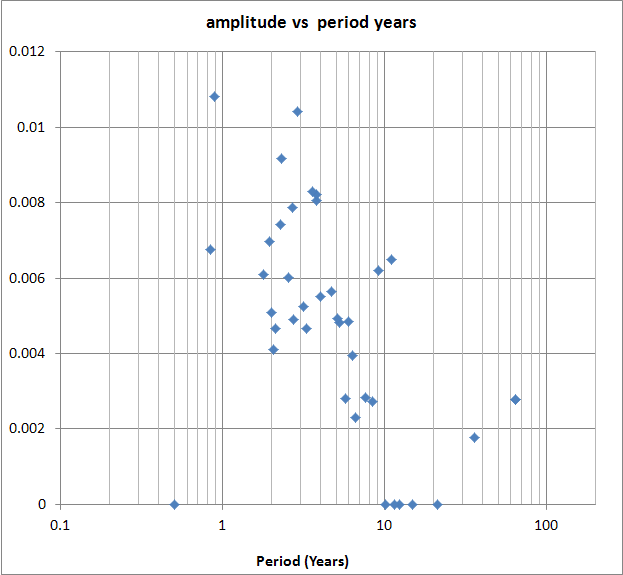 Problems:
Just what is the filter capability of the BandPass excel plugin? A better version is required.
Need a better trend profile than the 3rd order polynomial
Bandpass filter is not good doeas not detect longer periods - insufficient length of data
=======
Yes - I know that with enough parameters you can match anything with a sum of sines. But this plot gives a reasonable match for 160 years so a few years into the future may also be well matched!
It should also be noted that there is an underlying trend (the polynomial == GHG forcing?) which is always positive. But there are many negative slopes and zero warming areas synthesized.
﻿
Posted by thefordprefect at Sunday, January 16, 2011 4 comments