Well worth a look

Whatever Luddite sociopathology drives climate cultists to sabotage human ease-and-comfort at every opportunity, Santer exhibits it in spades. Like Briffa, Hansen, Jones, Mann, Trenberth et al. he is complicit in the most massive, savagely destructive fraud in human history
============================
Pamela Gray says: April 25, 2011 at 7:16 pm

I’ve been privy to the spectacle of seeing all kinds of accolades being directed to first class jerks. And have sometimes been at the receiving end of “jerk” intelligence and their special kind of superiority. It seems to be a fact of life that those who find being a jerk a rewarding way of life also tend to be at the top of a pile.
============================
And now showing at CA
Pete  Posted Apr 26, 2011 at 3:50 AM
You are totally wrong on a number of counts. This body of work has massive impact on public policy and there is continuing public interest, and I would contend a requirement for full disclosure. The University is also a public body and receives grants for it’s work from numerous public sources.


REPLY: This is Chris Colose, inexperienced student, http://www.aos.wisc.edu/~colose/ whatever. – Anthony
.......
You obviously know how I feel about you and your blog, and the level of scientific understanding here, so the insults are pointless. I will do my best to suspend my anger at some of the things people are spoon-fed (and that they actually eat) daily.


REPLY: You are right, your predictable insults are pointless, so stop it and take it up with Dr. Gray rather than dissing me for publishing his essay at his request. Consensus does not equal fact, and the moment consensus replaces empirically proven facts in science, science is lost. – Anthony

....
REPLY: He’s not at GISS, which is in NYC, he’s in Madison at UW, Home of McIdas and SEIU riots taking over the capital and all that. – Anthony

OK. Pat Michaels isn’t a “coward” because he uses his own name when he writes a comment about only 8 bodies being “coughed up?”

Gaffe? Really? You call that a “gaffe?”

And I think that “scrubbed” is more accurate than “correction.” Did he make a statement about his original phrasing, or was his post just silently edited?

REPLY: Scrubbed would imply removal. Correction is changing words/spelling. Now if you have something to discuss about TV media, then discuss it, otherwise take a hike. I get tired of your thread jackings here. Note the policy page. Note there I state WUWT has a low tolerance level for people using taxpayer funded resources to spout snark from the comfort of anonymity. – Anthony
-------------------------------
uknowispeaksense says:

He's really getting rattled these days:


“Moderator REP says:
August 1, 2012 at 7:52 pm
Jan P Perlwitz says: August 1, 2012 at 5:54 pm
Or is this a subtle try to intimidate me by bringing my employer into the argument? BTW: Who do you think is my employer anyway?
Jeez…. unless the budget cuts bit deeper than we thought or you developed a conscience, everybody and his brother knows you work for NASA/GISS.”
So once again, the MO here appears to be that if you agree with the work, anonymous review is fine, but as soon as significant or legitimate criticisms appear, you find it necessary to make a point of hunting down and exposing/blackmailing identities. This is DISGUSTING, and of course will not be a tactic available to you in peer review.
REPLY: Mr. H- whatever. You really want to go this way? Fine. Dr. Perlwitz is well known and well-respected in this community. It really doesn’t matter if he adheres to our “line” or not, he has my respect and that of many others. You can vehemently disagree with him, but if you try to silence him you may run into more of a problem than you thought. Dr. Perlwitz puts his name on his words.
You, on the other hand, are a sock puppet. Young Mr. Roberts is more than welcome to comment here… but if young Mr. Roberts wants to play stupid games, fine. His information gets dumped. One last warning, Mr. Roberts…. before I was allowed to be a moderator here, I made a comment in seven or eight different languages that in the cold light of morning I begged Charles to remove. Anonymity doesn’t make you free, it makes you stupid.
Actually, that’s not gonna happen. but you are pushing the envelope. -REP

Hmmm -  I seem to remember his email getting published as well - more secret snipping!!!

Hiding the Decline in full view

http://climateaudit.org/2006/12/30/briffa-et-al-2001-more-on-divergence/
Briffa et al 2001 – More on Divergence
After several years of trying, Briffa and Osborn have finally listed the sites used in Briffa et al 2001 and related publications. Briffa had reported results on large networks of over 300 sites collected by Schweingruber. Schweingruber had archived over 400 sites at WDCP.

.... One of the first exercises that I carried out was to calculate a simple average of all the available ring width chronologies in the Briffa et al 2001 network (369 sites – 387 less the 18 unavailable sites.) In this case, I just used the Schweingruber chronologies without trying to re-do using RCS chronologies.

Here’s the result. As you see, there is a noticeable decline in the late 20th century – the “divergence problem.” If this is the average of a large sample of 369 sites, what are the odds that a random selection of say 8 sites has a sharp uptick in the late 20th century. Not very
Posted by thefordprefect at Friday, April 22, 2011 0 comments

All base data from JAXA

This years area is following the same path as recent previous years - the area is increasing until the 1st week in May and then rapidly falling.Is this due to thin ice separating into small blocks which drift apart but stay above the 15% ice concentration? This would then be quicker to melt than large blocks. 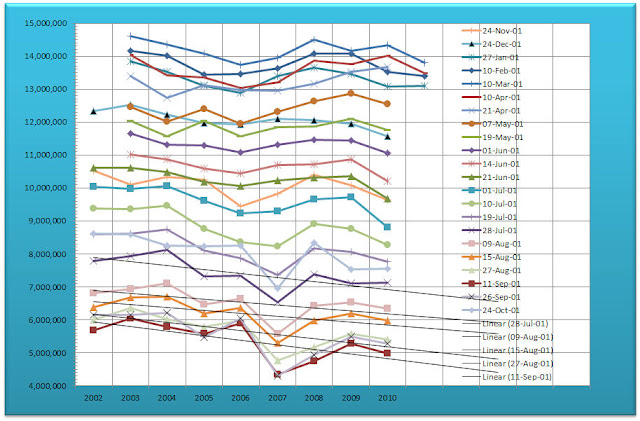 A plot showing a few selected days changes over time - note that 7th May has a significant positive slope! 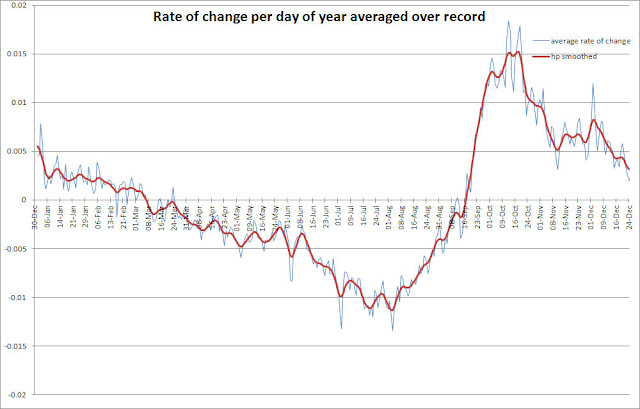 In no particular order:

Leif Svalgaard on Its the sun what did it

This is well-trodden ground. Nothing new to add, just the same old, tired arguments. Perhaps a note on EUV: as you can see here (slide 13)
http://lasp.colorado.edu/sorce/news/2008ScienceMeeting/doc/Session1/S1_03_Kopp.pdf
the energy in the EUV band [and other UV bands] is very tiny; many orders of magnitude less than what shines down on our heads each day. So a larger solar cycle variation of EUV does not make any significant difference in the energy budget.

It is not clear what his [Courtillot] theory is. I have come across two claims he makes: 1) the Earth’s magnetic field determines climate, and 2) cosmic rays determines climate. Now, it is of no use to discuss this if the influences are minor [because we are interested in the major drivers], so the issue is not if some subtle influence can be found by suitable massaging/filtering/torturing/misrepresentation etc of the [often dubious data and more dubious proxies], but whether such influence is large enough that is swamps anything else [otherwise we need no worry, e.g. if AGW is really larger than the solar influence, then who cares about the Sun]. The cosmic ray issue is clouded [no pun!] by the fact that the cosmic ray intensity is primarily controlled by the intensity of the Earth’s magnetic field, and not by the Sun [ignoring galactic changes, supernovae, aliens, etc]: http://www.leif.org/research/CosmicRays-GeoDipole.jpg the little wiggles are solar related, the big swing is not. Anyway, what should matter is what the GCR intensity actually is in the troposphere where clouds are formed and not what causes the GCRs. We do not have good measurements of GCRs before the 1950s [the early measurements back to the 1930s have uncertain calibration], but there have been no long-term changes in GCRs since then [the solar cycle changes are only a few percent anyway], e.g.
http://www.leif.org/research/Cosmic%20Ray%20Count%20for%20Different%20Stations.png
. Also, solar activity [and the solar wind and magnetic flux, etc] right now is on par with what it was in the 19th century [ http://www.leif.org/research/2009JA015069.pdf , Figure 10], yet the climate is claimed to be significantly warmer now, contrary to what we would expect from a cosmic ray variation. So, for me, there is precious little observational evidence for the GCR theory.
Posted by thefordprefect at Thursday, April 07, 2011 0 comments