Since I've been banned from commenting on WUWT here is my response to
http://wattsupwiththat.com/2013/06/28/imagine-the-outrage-from-environmentalists-if-it-had-been-an-oil-derrick/

All bird deaths obviously should be avoided but consider your personal footprint in these deaths:

Berthold referred to a study published earlier this year in Nature Communications which found that free-ranging domestic cats kill 1.4–3.7 billion birds (as well as 6.9–20.7 billion mammals) annually: that works out to 40 birds killed per cat every year. Many of those birds represented the end of their species: as many as 33 species of birds are thought to have been eradicated by cats. However, it’s worth noting that stray cats, as opposed to pets, cause most of the damage.

Figures are believed to be US only 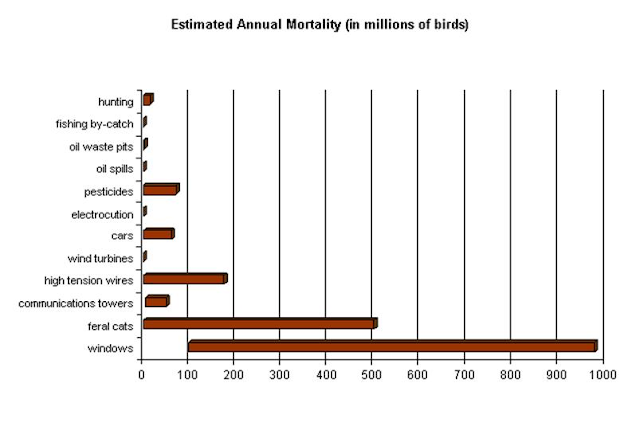 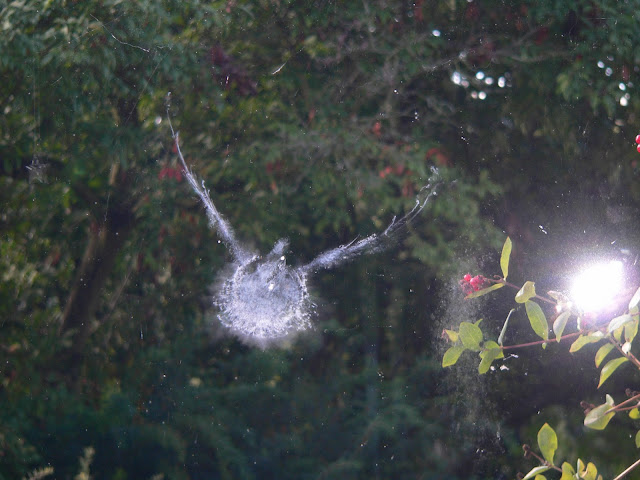 Here's one that didn't make it. Window on our house facing west.

Communication towers – estimates of bird kills are impossible to make because of the lack of data, but totals could easily be over 5 million birds/year, and possibly as many as 50 million.
Electrocutions kill tens of thousands of birds per year. This occurs mainly when large birds such as raptors make contact between a live electrical wire and a ground such as a pole. The relatively small number of birds affected belies the significance of this threat, since species such as Golden Eagle are more susceptible.
Cars may kill 60 million birds per year.
Wind turbines may kill 33,000 birds per year, and, as in the case of electrocutions, these birds tend to be large and scarce (e.g. raptors)
Pesticides may kill 72 million birds per year or possibly many more.
Oil spills kill hundreds of thousands of birds a year or more
Oil and wastewater pits may kill up to 2 million birds per year.
Lead poisoning – kills unknown numbers of birds each year, but Bellrose (many years ago) estimated that about 4% of the waterfowl population dies annually due to lead poisoning, and the California Condor recovery team stated that lead poisoning was the primary cause of the condor population decline over the last 50 years
Hunting - as a point of reference the carefully-managed annual waterfowl hunt kills about 15 million birds a year in North America. This, of course, is balanced by extensive and well-funded management and conservation efforts so hunting is not a threat to the population of any North American bird,
Domestic and Feral Cats – may kill 500 million birds per year or more.

From a famous twitcher 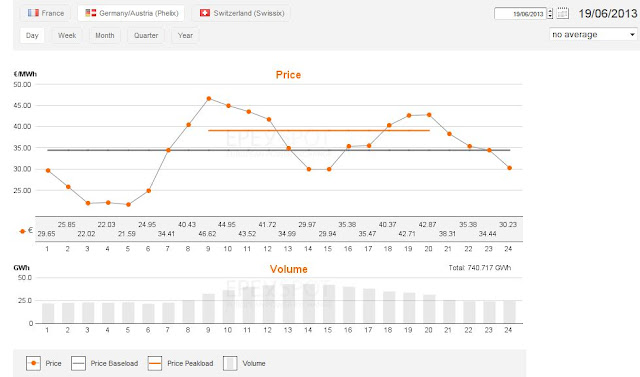 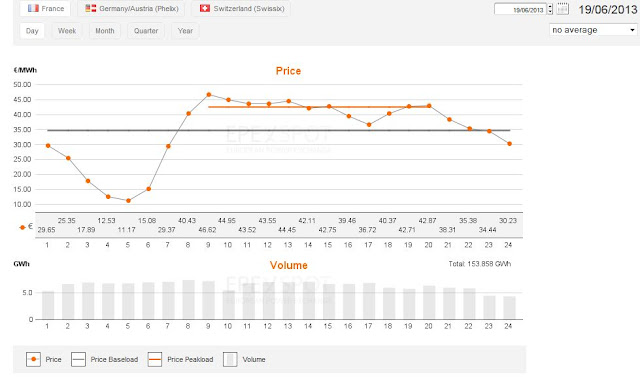 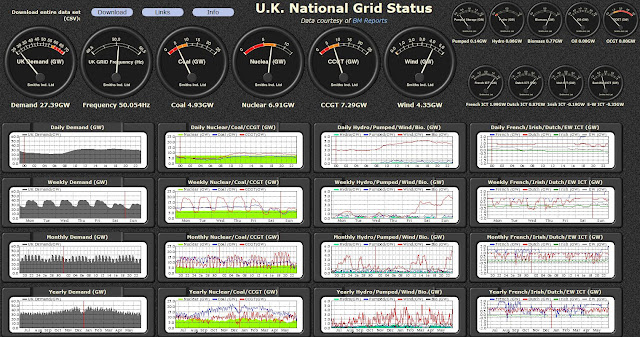 Wind is currently producing the same energy as coal. Also note the depressed peaks in daily use as wind begins to generate (however it is olso necessary to allow for the fact the wind increased at the weekend=low use).
Note also the grid safely handled an increase from about 500MW to 5GW without incident
The graphics are from the site
http://www.gridwatch.templar.co.uk/

How does hot air at 450°C show up on a thermal imaging camera: 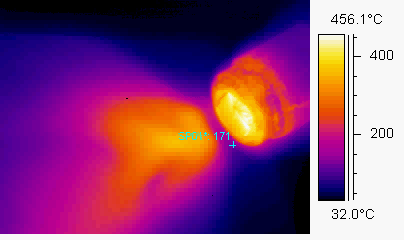 
Note that the camera response is in a highly transmissive part of the atmospheric transmissive window - to put the passband in a place where the GHGs radiate would give continual fogging due to the air between object and camera rather than the object desired.

So an IR window of 2 layers bubble wrap  (bubbles interspersed) will be better at IR transmission and probably better at conduction prevention.

You need aluminised bubble wrap to prevent hypothermia - need to stop the loss of IR!!!!

The tests trying to produce some replication of Willis's Iron greenhouse have been repeated using a multichannel thermocouple probe recorder measuring to 0.01°C (accuracy 1°C) and somewhat modified test setup.

The sensor has been modified to make it more responsive (less copper in the plate than in the original cone. Fine wire thermocouple used to reduce the heat conduction. 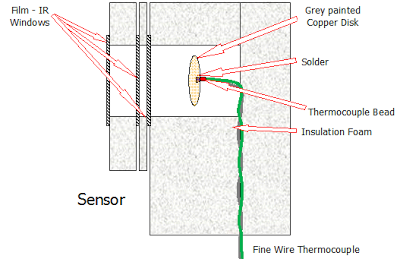 The insulated hot box uses much thicker insulation and the double sided grey sprayed copper plate temperature is monitored using another fine wire thermocouple. The temperature between the 2 IR windows and outside the window is now measured. A small fan is used to provide a continuous stream of ambient air between the hot box and the sensor to prevent conduction and convection effects upsetting the sensor reading. The heating voltage is maintained to 9.254 volts +-3mV ensuring constant power input to the hot body. 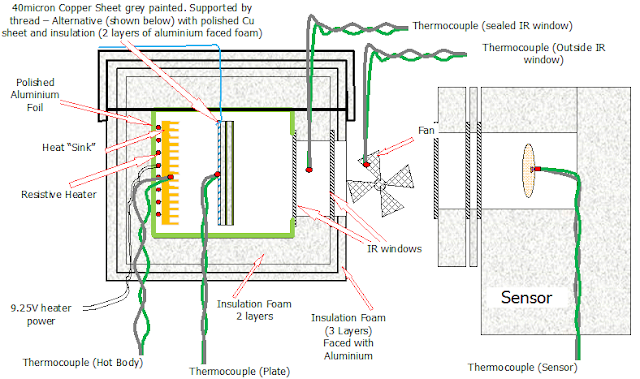 What is expected is a significant increase in the hot body temperature when the grey plate is inserted. The Sensor should report a drop in temperature until the system has reached equilibrium It should then be at the same level as before the grey plate was inserted - I.e. the radiation from the hot box should be constant before and after grey plate insertion.


The rise in temperature of the hot body should now be significantly hotter than either no plate or grey plate (100% of forward facing IR should now be reflected back onto the hot body causing the temperature to rise until the additional energy balance can be restored.
The sensor should show a drop in heat for the time that the reflective plate is in position. 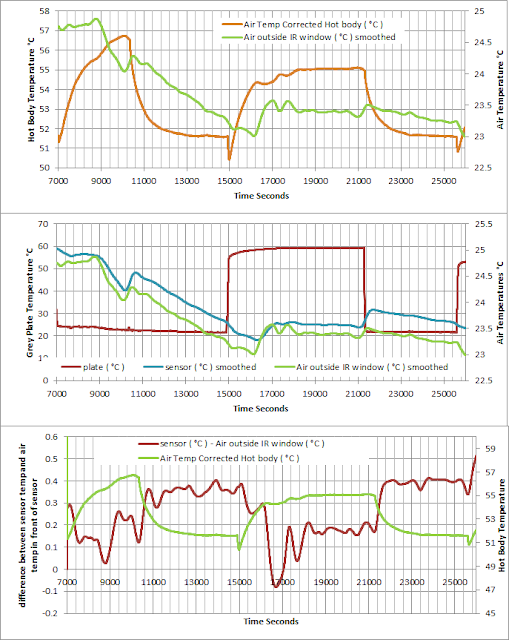 The measured temperature (= IR output) from the sensor does not agree with expected result..

With the grey plate not equalling the hot body temperature there would be expected lower IR emission so perhaps this could explain the lower temperature compared to no plate.

With the reflective plate the IR output does not go to zero. possibly the plate warms and the insulation is insufficient. The IR sensor needs to be improved - possibly an IR thermometer? But will these then read the temperature of the IR windows?

If you believe that backradiation or reflection cannot add energy to the hot body from which the radiation originates then these results alone disprove this belief.
Posted by thefordprefect at Sunday, June 02, 2013 69 comments