I was surprised that this paper was mis-interpreted as suggesting negative cloud feedback. This is a basic error by the author of the post that has been highlighted by many contributors including Roy Spencer.

REPLY: Dr. Allan, thank you for visiting and for your correction. Please note that I’ve made an update to the post, removing the word negative from the headline and including why I interpreted the paper to demonstrate a negative feedback for clouds. I welcome your thoughts. It seems to me that if clouds had a positive feedback, the dips in 1998 and 2010 in your figure 7 would be peaks rather than deep valleys.
...- Anthony

Bishop Hill and the skeptical cookbook

And of course the factual post converted to a "learning" exercise:
Its snowing CO2 in the antarctic!!
http://wattsupwiththat.com/2009/06/09/co2-condensation-in-antarctica-at-113f/


My post on Curry point out that watts and his ilk have been demanding peer review by blog. They get it with Best ... and then complain bitterly about Best  pre-publishing - you just cannot win!

Watts
you/your accolytes have been calling for peer review by blog for a very long time (recent postings):
Peer review is dead, long live blog review
Posted on September 21, 2011 by Anthony Watts
By Marc Hendrickx writing in ABC’s The Drum
An opportunity for online peer review
Posted on March 27, 2011 by Anthony Watts
I have been asked to present this for review by readers here, and to solicit critical comments for the purpose of improving the presentation.
Now, apart from the press release what is the difference with the BEST release?
From my reading the press release is all about try to stop them misrepresenting the information (as happened with the CRU emails).
Why are you so critical of best when they seem to be doing what you want (e.g. listening to McIntyre)?
Posted by thefordprefect at Wednesday, September 21, 2011 0 comments

More on Bart, FFTs and Cloud vs temperature

To me it seems that the plot has been lost on CA were discussions revolve around FFTs iFFT convolutions etc.

Is there a relation ship between cloud (Net_tot-SW_clr) and temperature or temperature and cloud?

How about a few simple plots:

The first uses data filtered with a Hodrick-Prescott filter of 1 and plots temperature anomaly against (Net_tot-SW_clr) sorted . 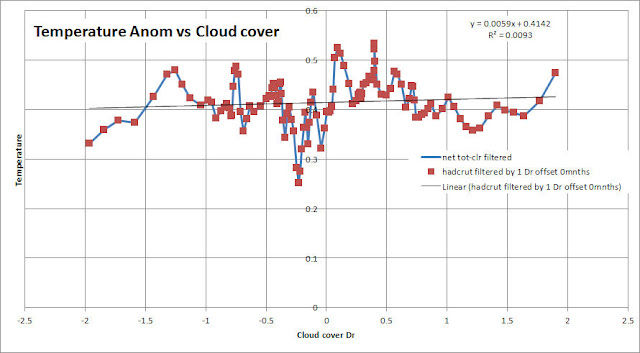 The second removes any filtering: 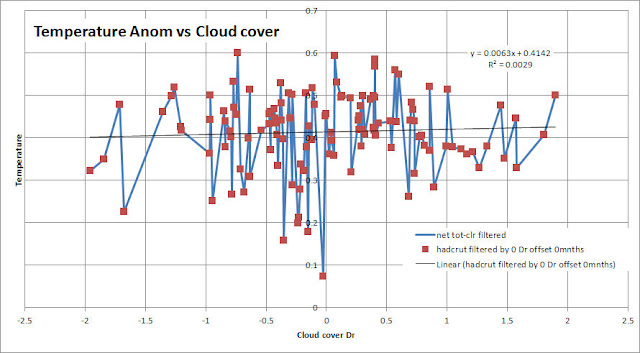 As can be seen the is a slight rising trend.

So now reverse the axis and plot cloud cover vs temperature anomaly (sorted) These are Duff!!

So there does seem to be a temperature and  (Net_tot-SW_clr) relationship. But which is the forcing????
Posted by thefordprefect at Monday, September 19, 2011 0 comments

Many "sums" have been done using FFTs and convolution.
It started out with Spencer:

Changed to this with "Bart"

However there seems to me to be problems with all of this.

1.  the data being used is from 10 years only
2.  the data from clear to cloudy sky is not simultaneous
3.  the  data is average over 1 month so can never be safely used to subtract clear from cloudy - the data is smeared over 1 month and can never be data from the same region.
3a. Albedo of soil and water are very different- cloud over water will show a large TOA flux difference wheras the cloud over land will show less outward going flux.
water albedo= 0.02 approx (at some angles)

ground albedo = 0.1 to 0.5
Clouds albedo = 0 to 0.8
Wiki
4.  What about the "insulating" effect of clouds at night. Shouldn't this be included in any flux calculations?
5.  There is no way the data available from Spencer/Dessler/Bart can show the accurate change in flux due to clouds

the Plots below are simple spectrums using the FFT function in excel. Note that any thing over 60 years period has very little resolutuion. and these are from 200 year records not 10 year!!.

Also when doing FFT on a non infinite series the trend should be removed before the fft transform is applied as the termination of data at either end causes problems. Using a FFT windowing function will also improve performance.

Comparison between data with a trend and detrended data:

Using a similar setup to the previous  posting different filtering methods have been used to see if pentration depth can be tested.
In test 1 a heat sink was placed in the tube preventing any visible light entering the water. The stable temperature of the heatsink was 100C The tube was ventilated from just above the transparent seal above the water to just below the heatsink. at the top of the tube. The bulk of radiation entering the water would be radiated from the bottom of the heatsink

In test 2 the heat sik was replaced with a 1cm deep tray of water. This should effectively remove any LW IR leaving only visible light. The tube was again ventilated.

Not very conclusive although it appears that 100C blackbody is significantly attenuated below 6mm of depth. (the final 2 thermocouples showing the leakage of the thermos heating the water (possibly)
The visible light seems to be adding significantly to the water at a depth of 55mm.

Note that there seems to be no explanation for the dips in reading of temperature. The apparatus was not disturbed and no light change occurred. (one of the dips - at 24mins was caused by the filter water being replaced with cool water)
﻿ 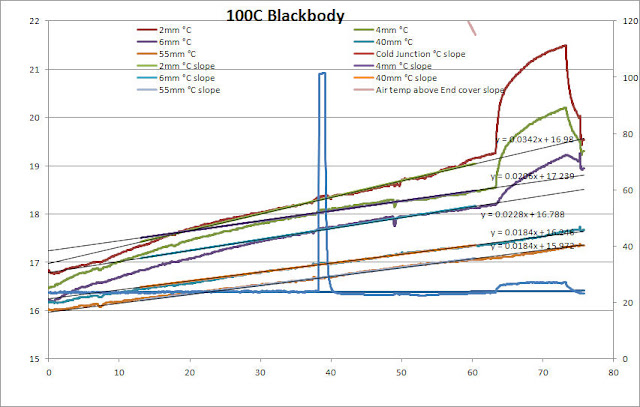 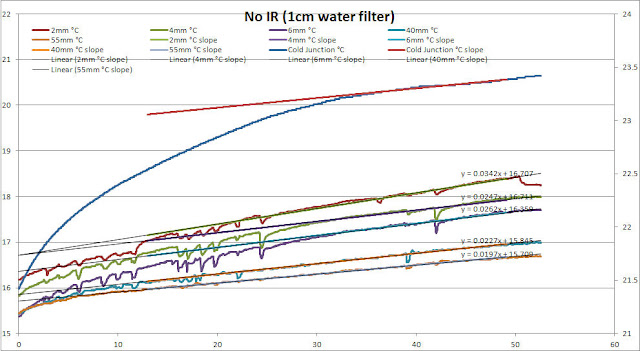 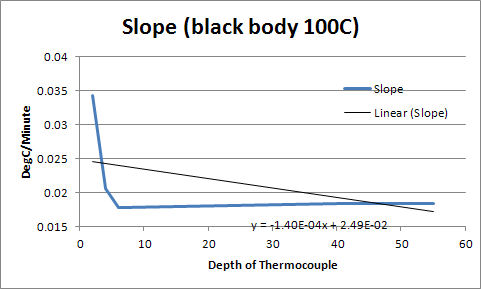 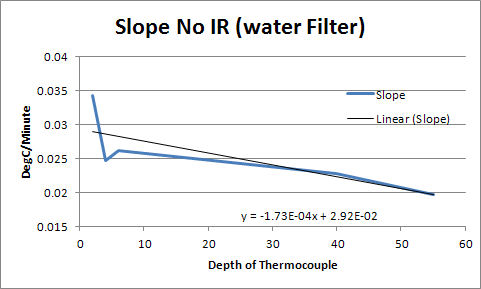 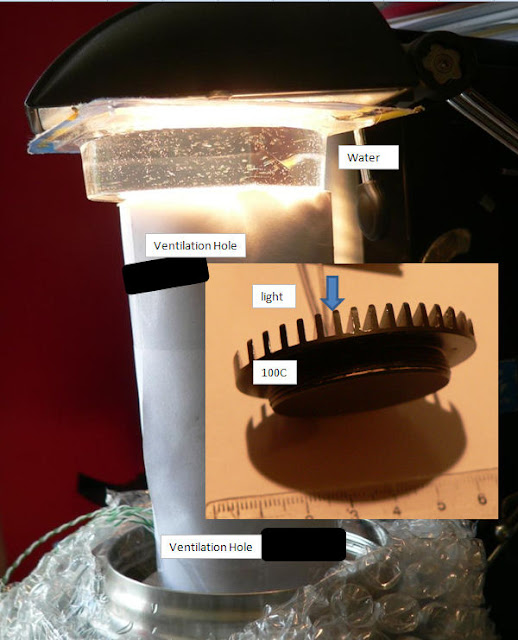 The unsupported accusations against Jones, Mann etc continues unabated on the "auditing " site
"Did he add any "
"The prima facie evidence "
"this particular finding of the Inquiry Committee clearly does not follow "
"Watch the pea here, "
"It seems to me that “Professor” Jones "
"I use *might* because it is still not clear that any offense was actually "
"The academics did not describe the conduct as it was. Instead, they misdescribed the conduct and then made findings unsupported by the evidence"

thefordprefect Posted Sep 4, 2011 at 5:54 AM
Your comment is awaiting moderation.


Lynching is an extrajudicial execution carried out by a mob, often by hanging, but also by burning at the stake or shooting, in order to punish an alleged transgressor, or to intimidate, control, or otherwise manipulate a population of people. It is related to other means of social control that arise in communities, such as charivari, riding the rail, and tarring and feathering. Lynchings have been more frequent in times of social and economic tension, and have often been means used by the politically dominant population to oppress social challengers.

Then of course there is the poor Phil post.

This is just unbelievable. Apparently Jones lost kgs of weight, and aged 10 years just to comply with media management instigated by Neil Wallis.
This is a truly despicable post by someone who claims only to want the truth!!!!

If McIntyre is really a climate auditor then should he not be auditing papers such as the Spencer & Braswell paper?? The Cern Cloud report???

No, Perhaps his cognitive function has been clouded by hatred of all things Mann and Jones!

thefordprefect Posted Sep 4, 2011 at 6:21 AM
Your comment is awaiting moderation.
McIntyre if you really are a climate auditor then should he not be auditing papers such as the Spencer – Braswell paper?? The Cern Cloud report???
There are so many from both sides.
I suppose you will be reposting all the hide the decline emails soon. It must be over a week since you mentioned these!!!!!


There are many revisions:

Some are just revised by a few 100ths K why? if this is such a clean data source?
Satellites do not give a global snapshot at a time they are a moving window taking hours? days? to complete a global sweep

Is the satellite data corrected for local time?

If satellites recording temp are so variable how can anyone use them to determine the effect of clouds? As far as I’m aware the global temperature derived from satellites is adjused for cloud cover!!!!

Temperatures are derived from someone’s models that derive temperature from radiation+mods for intervening layers etc. Is this really better than surface measurements
Posted by thefordprefect at Sunday, September 04, 2011 0 comments