The UK Storm of 28th October and the National Grid

The storm of 2013-10-28 managed to isolate a UK nuclear station from the National Grid leading to headlines such as:

The isolation from the grid means that essential systems controlling the reactor only have diesel generator backup and so for safety the reactor is shut down.
Just How is the loss of 1GW handled by the grid - the two plots that follow use data generated every 5 minutes (the dotted curves use the scale on the right of the plots all vertical scales are in MW): 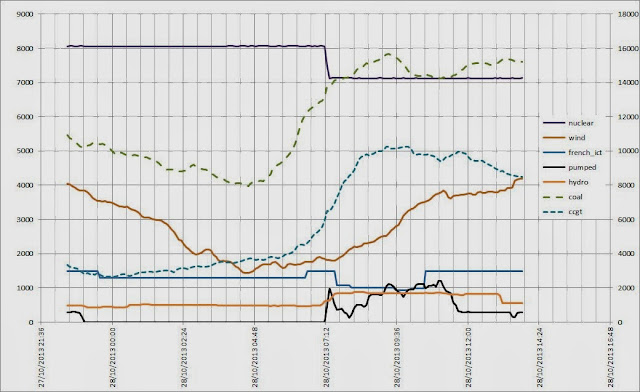 Note that the bulk of the transient is compensated by pumped storage during the 1st 5 minutes (actually responds within 12 seconds) Hydro and coal and gas (CCGT) are also ramped up and pumped storage is reduced.  However at this time in the morning demand is rapidly increasing and coal and gas output cannot provide further rapid increase an so pumped supply is again increased, 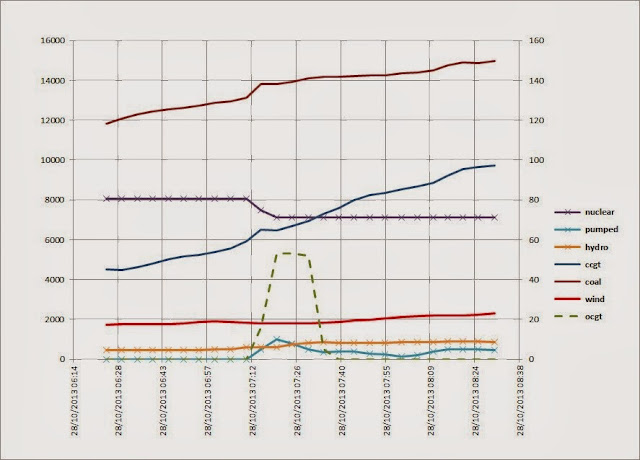 ﻿
The plot shows data at 5 minute intervals so the immediacy of the Pumped storage is not visible.
It is also worth noting that the rarely used OCGT (inefficient gas) is brought online in case it is needed (only 50MW is utilised - past OCGT has provided up to 400MW).
So this aging reactor of approximately 1GW switching off is handled adequately by the system. In particular the instant response pumped storage.
The proposed Nuclear plant at Hinkley Point C will use 2 * 1.6GW reactors Losing one of these will equire spinning reserve (as provided by pumped storage and spinning turbines of other thermal stations)
Pumped storage:
Each of Dinorwig's six generating units can produce 288MW of electricity, offering a combined station output of 1728MW.
Ffestiniog's four 90MW units have a combined generating capacity of 360MW.
I.e. a total of around 2GW. This will handle one of Hinkley's reactors but not both.
Posted by thefordprefect at Wednesday, October 30, 2013 0 comments