A rerun with improved sensor and reflective plate.


Case 1. is the equivalent of the steel greenhouse of Willis Eschenbach and should cause the heater to run hotter and the emitted radiation to be the same as if the plate was not there.

Case 2. simply reflects all radiation back to the heater which should then heat up to a temperature limited by losses from conduction through the box

Case 3. Radiation from the plate facing the IR window should pass through unhindered. The heater temperature will be controlled by conduction losses and radiation losses through the window.

The experiment cannot be expected to exactly simulate the Iron Greenhouse. It should be able to show radiation through the window roughly constant between case 1 and case 2 but temperature of the heater being higher in 1. It should also show the heater reaching a higher temperature in case 2 than case 1. 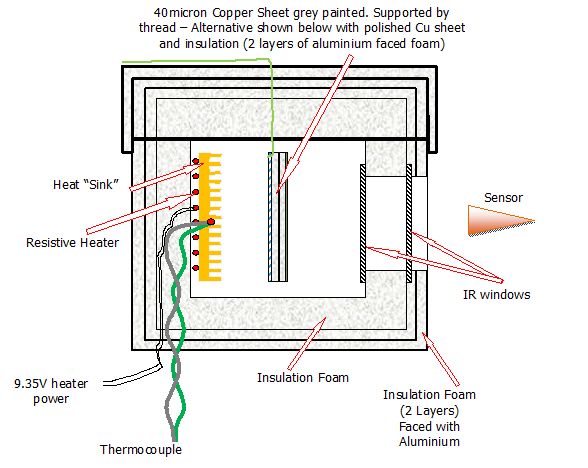 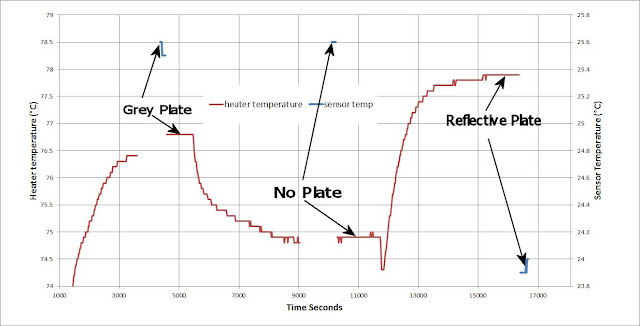 Note that only one temperature probe could be measured a  time thus giving the gaps in the records.
1. The grey plate allows the heater to warm to a temperature above the no plate temperature (76.8°C compared to 74.9°C)
2. the grey plate and no plate emitted energy warms the SENSOR to similar temperatures i.e. 25.5 compared to 25.6°C i.e. the emitted energy through the window is similar.
3. The reflective plate allows the heater to warm to the highest temperature with low emission of energy (sensor warmed from a background of 22°C to 23.9°C

This again shows what was expected by the existence of back radiation allowing the heater to reach a higher temperature.

Posted by thefordprefect at Tuesday, April 02, 2013