Does Thermal Radiation Travel From Cool To Hot Bodies

There is a belief that the cold atmosphere with CO2 (and other Green House Gases - GHGs) cannot keep the earth warmer than if there were no GHGs. A good source of these comments are WUWT
Michael Moon says: February 6, 2013 at 1:11 pm
Silver Ralph,

You just flunked your first hourly in Thermo. The cooler radiator would be warmed by the warmer radiator, and begin radiating more. If you think this would warm the warmer radiator, then you will fail all your hourlies and never get through school.
Wilis, Joe Public has it exactly right. If you want to know what happens to the flux from a cooler source when it hits a warmer source, the answer is exactly nothing. It is not absorbed, but immediately re-emitted, transferring NO heat.
All these analogies are amusing but ignore Second Law.
The sticking point is usually verbalised as "you cannot warm a hot object with a cool object".  And this is true, but you can slow down the cooling of a hot object by placing a cooler object (that is warmer than the background) next to it.

Radiation travels in straight lines – generally! – and when it leaves the cool object it does not know whether it will hit a hotter or cooler object. It is only the albedo that will determine how much  radiation is reflected or absorbed by the objecty it hits and albedo changes little with temperature in the range considered in climatology.

Note that a body may reflect at one wavelength but absorb at another. This effect is not considered here.

Note that the vertical scale is logarithmic each division represents a 10x increase in effect
An atmosphere without GHGs will not impede incoming or outgoing radiation significantly. The body of the earth will receive full solar radiation and it surface would heat up to a temperature that will, as a near black body, radiate the same quantity of radiation directly to space at a temperature of  2.7K (i.e. -270°C).

In addition to the solar radiation the body of the earth would receive radiation from the 2.7K temperature of space.

GHGs absorb some  of the long wave infra red radiation from the body of the earth. These will then almost instantly emitted in all directions. After multiple absorptions and re-emissions there will be effectively 50% up and 50% down. The downward radiation ( “back radiation”) will be from an atmosphere much warmer than the 2.7K of space. The total radiation hitting the earth will be solar+back radiation+2.7K from space. With a warm GHG atmosphere the net radiation is still to space but the body of the earth is receiving addition energy from the GHGs and so will be warmer.

Without GHGs there is very little radiation from the rest of the atmosphere - O2 N2 etc absorb and emit little radiative energy (they will of course conduct and convect). But a gas atmosphere without GHGs will not radiate to space. The body of the earth will of course cool since this will STILL radiate - its radiation passing straight through the O2 N2 molecules.
This experiment attempts prove or disprove the supposition that a warm object cools more slowly in the presence of a cool object (warmer than background but cooler than the hot object).


The sidewalls are approximately 150mm high and the whole unit rests on a wooden bench.

The double layer cling film barrier attempts to stabilise the environment around the hot plate when the cool side changes from a warm object to background condition. It is intended to isolate the hot plate from conduction and convection on the cool side whilst passing IR radiation. 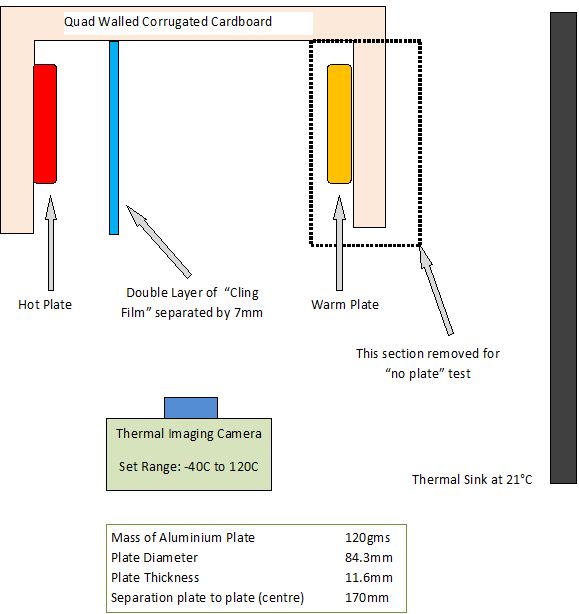 The two plates were heated using a hot air gun. The hot plate is heated to well above the maximum range limit for the camera (120°C). The temperature is then allowed to drop to 120°C whilst the environment stabilised

The temperature difference between hot and warm plates was approximately 18°C at the start of measurement. At 120°C the camera records a sequence at 6.5 frames per second with maximum noise reduction (ie the cameras internal algorithm averages out noise on  the measurements). A reasonably high data rate is chosen to allow averaging to be applied to the data if necessary. 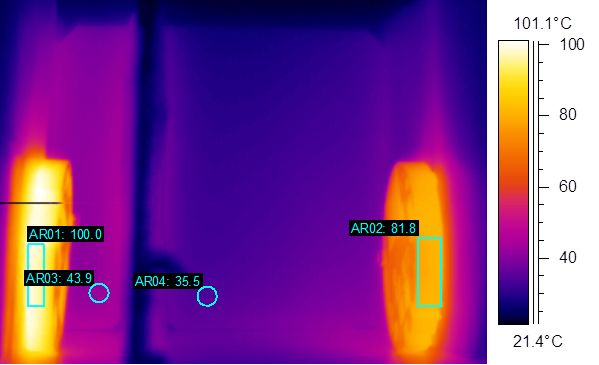 The picture shows the setup with hot and warm plates (18°C temperature difference) facing each other through a “double glazed” convection and conduction barrier (the vertical black line on the left). The temperature shown between plates is the wall temperature not the air temperature (see earlier post showing that air and water vapour are not picked up on the thermal camera http://climateandstuff.blogspot.co.uk/2012/12/water-vapour-and-thermal-imaging.html)

The wall temperature on the hot side is 43.9°C – this is the temperature of the wall approximately 250 seconds after heating was stopped. 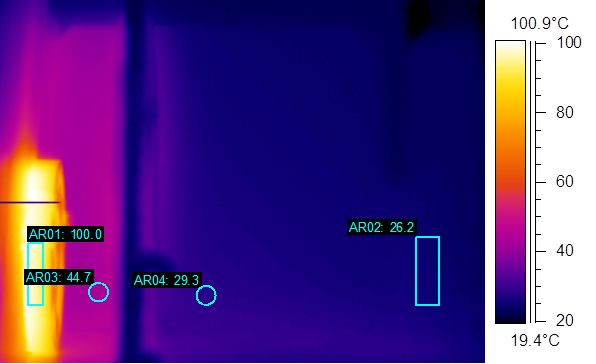 This picture shows the no warm plate scenario approximately 230 seconds from heating having stopped. Note that the wall temperature in the hot compartment - 44.7°C is similar to that in the hot/warm setup - 43.9°C.  The open side of the setup is facing a matt black surface at approximately 21°C. The data from the run is extracted using suitably placed measurement areas on the 2 plates: 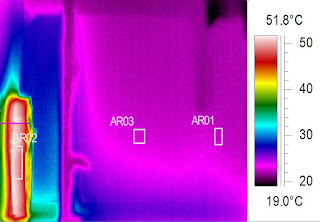 Only area AR02 is of interest – the hot plate temperature – although any area can be analysed after recording.


The temperature of each pixel in the defined area (6x19 pixels approximately) is averaged.

The two runs provide series of data with the hot plate cooling from approximately 120°C to 50°C with temperatures measured every 154ms.

The rate of cooling should be the same when cooling from the same temperature with or without the warm plate if the statement "You can slow down the cooling of a hot object by placing a cooler object (that is warmer than the background) next to it" is not true.

The two curves have to be aligned such that at one time period the two temperatures are identical. This is manually adjusted in the spreadsheet (available on request). 120.0431°C (with warm plate) and 120.0784°C (no warm plate) are the closest match temperatures These are at a time of approximately 1 minute from start of recoding.

A second plot has been produced that is sychronised at 67°C. This shows that the result is not just anomaly caused by the heating process


A total of 5700 results per run were obtained and analysed


From this it seems clear that when a hot and warm plate are interacting radiatively, the hot plate cools significantly slower than if there is no warm plate.

If the initial data up to 600seconds is ignored there is still an increasing deviation in the plot showing the plate is not cooling as quickly. Obviously the hot plate does not get hotter - it still cools, but at a slower rate!


The photo below shows the with and without temperature of a hand measured with the camera (it should be noted that the camera response does not extend over the whole IR range – only 2µm to 13µm). The temperature difference shows that 2 layers of "cling film" absorb a significant amount of IR but not ALL of it (hand temperature with clingfilm is 30.2°C and without 35°C ) In order to bring the temperatures of the hand back to 35°C the emissivity correction in the camera has to be changed from 0.92 to 0.58.

RADIATION FROM A COOL BODY SLOWS THE COOLING OF A HOTTER BODY
Notes: Sources of error Cooling of hotplate will be affected by:
Inaccuracies - Most are neglegible:
Confirmation bias:
I  obviously would like to show proof of the statements made in the introduction, however the results are extracted and plotted by a simple spread sheet which can be made available, There is no manual operation at this stage.
Calculations are simple and carried out on both sets of data identically

All I can say is that these are the results obtained from this simple experiment without modification.

The results seemed too good to be true so I extracted the data from slightly different areas and redid the spreadsheet calculations. 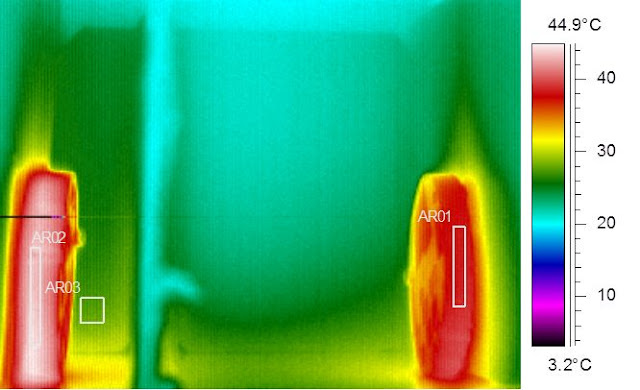 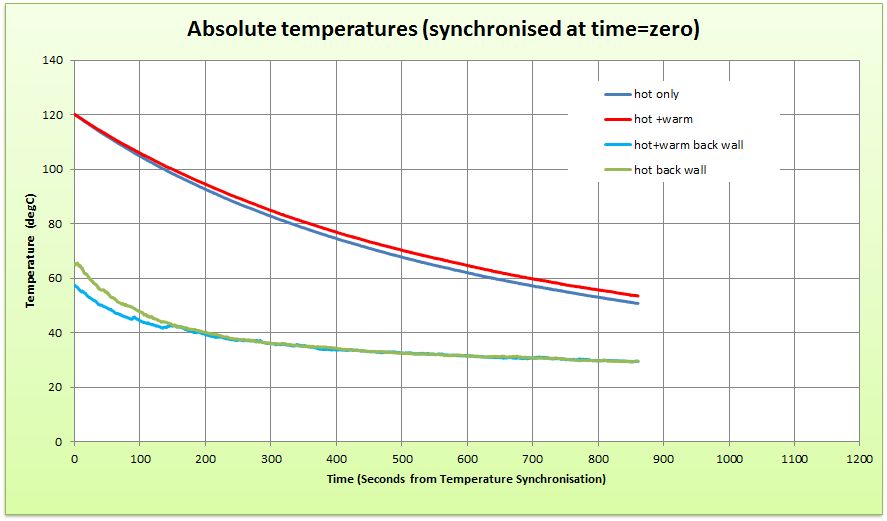 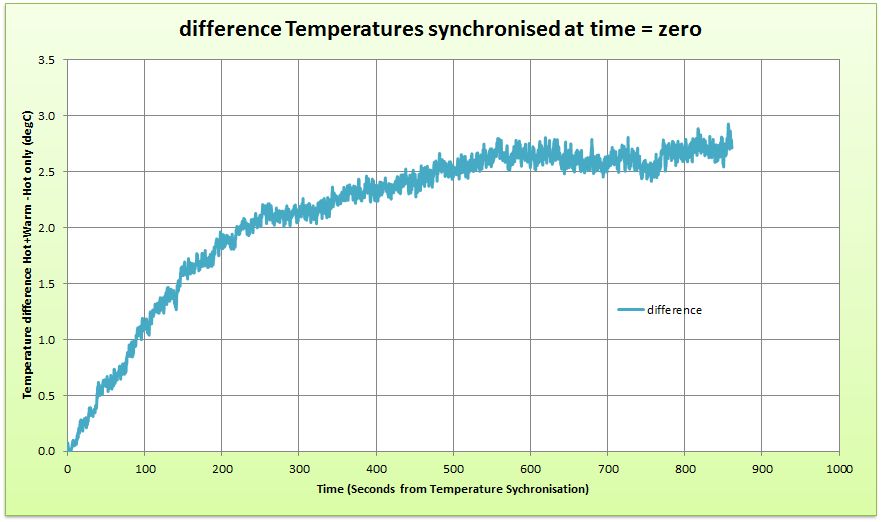 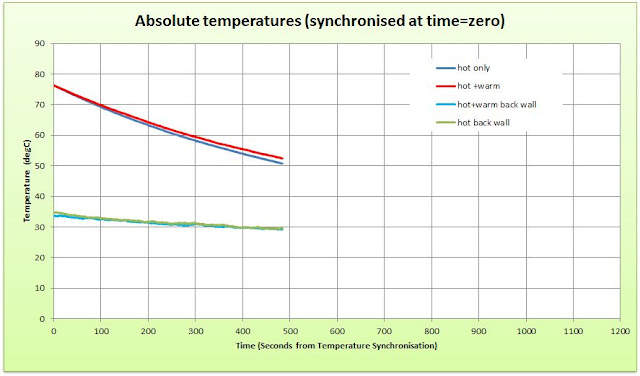 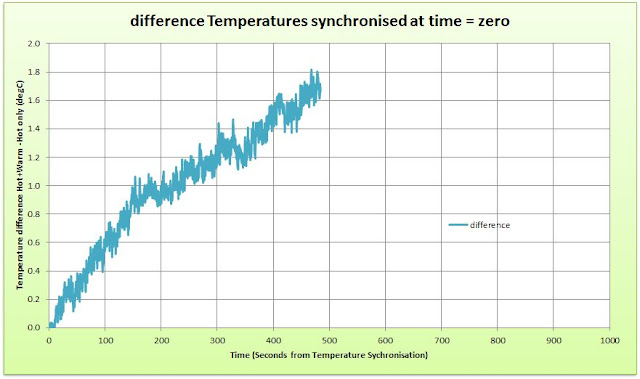 
Possible problem is the not quite thermally transparent cling film. - as this heats it will begin radiating.