A cool body can transfer measurable heat to a hotter body

So much non-science about transfer of energy between different temperature objects.
So many state that it is impossible for a cool object to heat a hotter object.

Specification for a thermal imaging camera

This thermal imaging camera will operate at +50°C ambient This means the imagaging device (a micro bolometer array) is at at least 50°C since it is uncooled.
How can it measure -40°C when it is at 50°C?

How does a microbolometer work:
http://www.laserfocusworld.com/articles/print/volume-48/issue-04/features/microbolometer-arrays-enable-uncooled-infrared-camera.html

Modern microbolometers measure temperature changes caused by IR absorption in individual pixels, which are thermally isolated and assembled into focal-plane arrays (FPAs).
Each pixel in an array is a very low-mass IR-absorbing structure supported by thin legs, which limit heat conduction to the underlying substrate, as shown in Fig. 1. The lower the mass of the illuminated pixel, the less IR energy is needed to increase its temperature a given amount, and the more sensitive it is.

FIGURE 1. One pixel in a microbolometer array. An infrared-absorbing surface is elevated above the substrate and thermally isolated from adjacent pixels. Low mass increases the temperature change from heat absorption. Read-out circuits typically are in the base layer, which may be coated with a reflective material to reflect transmitted IR and increase absorption of the pixel.

Two classes of IR-absorbing materials are used in microbolometers. Pyroelectric or ferroelectric crystals generate electrical signals that are directly proportional to the temperature increase caused by IR absorption; the most common material now in use is barium-strontium titanate. Other materials act as thermistors, in which the electrical resistance changes with temperature. As in the original 19th century bolometer, measuring the resistance of a microbolometer pixel measures the incident IR intensity. The leading materials today are the semiconductors amorphous silicon and vanadium oxide (often abbreviated VOx), which are compatible with the standard semiconductor processing technology used to fabricate the read-out circuits that generate images.

The sensitivity depends on how much the resistance or other electrical signal changes with temperature, and this depends on the absorbing material. The pixel response time also is important; absorbers should collect heat quickly and hold it long enough for measurement, then dissipate it before the next frame is recorded. A typical rule of thumb is that the time response should be no longer than one-third of the interval per frame, about 10 ms for a 3 Hz frame rate. Response time and performance also depend on the read-out integrated circuit (ROIC), which collects temperature data from all pixels for each frame. Noise usually is measured as noise-equivalent temperature difference (NETD), with lower being better, and 50 mK a desirable target.
=================

Heat from the bolometer will be radiated away in all directions there can be NO imaging of the object from this radiation leaving the bolometer. Radiation leaves the bolometer before it knows where it will land so will be equal from all parts of the bolometer even if it eventually lands on a cooler object beyond the lens.

Unless you postulate negative energy rays (cold rays - this would be a new concept on me!) from the cold object that can be FOCUSED onto the bolometer then I cannot understand how statements suggesting that cold cannot heat warm can be a feature of the explaination of a bolometer’s operation.

Note that thermal imaging to give exact temperatures is not simple the emissivity of the object under inspection affects the temperature calculated. Also a IR reflective surface may actually show a temperature of a reflected object rather than the reflector

Point a microbolometer array through a germanium lens (i.e. a thermal imaging camera) that focuses objects at -273 to +1500C onto parts of the array.
at -273C the bolometer sees no source of heat so it will be at say 20C this being the temperature of the bolometer when it is warmed by camera ambient within and losing heat at 20C
at -20C the bolometer sees both focused IR from the object and the energy from the 20C local camera ambient. The temperature 20C is the same as before (within reason) so the rate of loss of heat will be the same as when -273C is focused. When the bolometer radiates it does not know the temperature of its destination. The bolometer is now receiving more energy than when -273C is focused. The bolometer therefore heats a fraction to say 20.1C
Hopefully you can see where this is going.
The microbolometer temperature is modified by temperatures above -273C - the IR is focussed by the germanium lens onto each part of the array. The temperature of the bolometer is then converted to a video signal. This can therefore show a difference between the bolometer with focussed ir from an object at -20c and the bolometer at -273C DESPITE the fact the array is at 20C.
The lense does not focus cold rays!
The stuff on my blog shows photos/videos taken with a room temperature microbolometer array. This includes sky photos showing temperatures down to -40C (the camera limit) together in the same frame as a temperature of  -1. All measured to an accuracy of +-2C with a sensitivity of 0.03C
(note that as ambient changes the array is calibrated by viewing a isothermal plate rather than the image required)
If cold objects did not add energy to a warm object then this sort of camera would not work. (note that it does not cause warming it slows cooling.) There are no cool rays to focus onto the array so it has to be IR.
The difference between bolometers and thermopiles is large. bolometers are used for arrays as these can be processed like silicon semiconductors. But in essence the physics is similar.a sensor temperature is modified by the IR falling on it (from any thing above -273C) and this is referenced to a measured internal temperature.
I agree that the accuracy of the PIR is not good about 5w/sqm at 300W/sqm i.e. about 2% but saying this negates any measurements seems over the top. 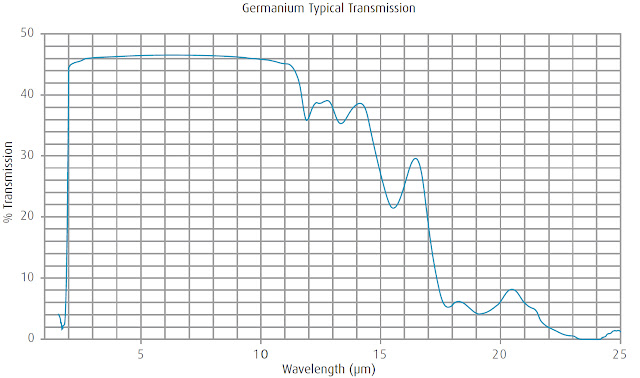 Some stuff from the BBs
http://climateofsophistry.com/2013/03/08/the-fraud-of-the-aghe-part-11-quantum-mechanics-the-sheer-stupidity-of-ghe-science-on-wuwt/#comment-1251﻿
thefordprefect says:

When these devices detect “cool”, it is a LACK of signal that they detect, a “negative voltage”.

Look at the drawing for a bolometer. There is an IR absober. It has IR only focussed on it (the camera lens is made from germanium – which is opaque to visible light – I have added the transmission property to the post indexed above). The IR absober temperature is measured and the this value is output to the video processor.

Can you please explain what you mean by “detect cool” I keep stressing there are no cool rays there is only Thermal radiation (between 2u and 15um) that can get through the lens. This thermal energy adds to the energy from the ambient conditions and changes the temperature of the IR absorber – a -273C temperature adds no energy, a -20C adds more and the absorber warms above the temperature that would have occurred at -273C. a source of 1500C (within the range of the cameras calibrated sensitivity) adds even more energy so the absorber is warmer still.

And I LOVE this one on science of doom page
http://scienceofdoom.com/roadmap/back-radiation/#comment-13825
:


The chicken wire has emissivity eps as is indicated.

As concerns your second question, you should read Claes Johnson.

I will tell it to you in simple language.

There are two kind of radiations, the informative one, and the heavy artillery , radiation which carries calories.

The information radiation is used in

infrared camera’s, IR remote thermometers,pyrgeometers and indeed two plates telling each other which one is the warmest.

It is two way traffic.

In case of the two plates the information radiation is a traffic light, and enables nature to obey the second law andto send the second heavy artillery with calories from the warmer plate to the colder one!

Therefore in the paper I insist that SB is always written for a pair, with two temperatures. In fact also emission from temperature T to temperature zero K is a pair, q=sigma*(T^4-zerok^4) which is usually written in abreviated form since zeroK^4=0!.

If this matter interests you, go to the blogs of Johnson, where you can read historical phrases by Planckton and by Einstein that indeed they were not happy with the quanta!